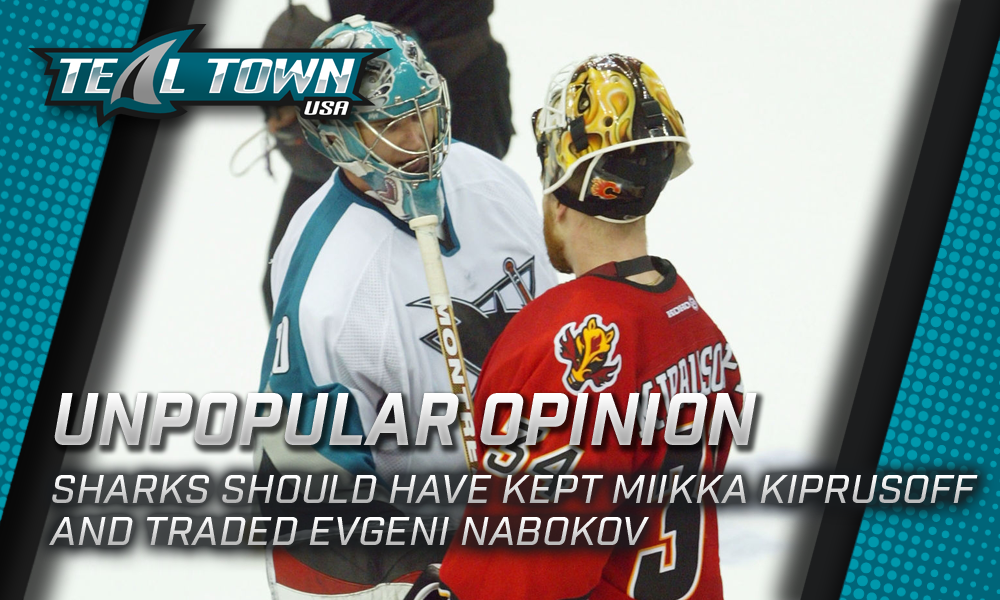 Recently, Hockey Jerk told me the Sharks should’ve traded Nabby and kept Kipper. At first, I was incredulous, but then we started digging deeper. Of course hindsight is 20/20 and betting on how a trade will pan out all is likely the same as betting when the NHL starts back up. But let me paint you the picture and you make the call.

After coaching the San Jose Sharks for 5 seasons, Darryl Sutter was replaced by Ron Wilson on December 1, 2002. Four weeks later, the Calgary Flames named Sutter their head coach. The following April, the Flames also made Sutter general manager of the club after the Flames missed securing a 2003 playoff spot. One month later, in May of 2003, Sharks GM Dean Lombardi, was replaced by Doug Wilson after the Sharks also missed the playoffs. Sutter was obviously familiar with what the Sharks had in goal from his time in teal. Did bitter beer face take advantage of a new Sharks GM?

Taken in the 9th round of the 1994 draft, “Nabby” played his first NHL game on New Year’s Day, 2000, relieving starting net-minder, Steve Shields. Nabokov’s first NHL start came a couple weeks later. In Colorado, Nabokov stopped 39 shots in a 0-0 tie for his first shutout against perennial Vezina nominee Patrick Roy, and the Avalanche.

While Steve Shields posted his best numbers during the 1999-2000 campaign, San Jose’s starting goalie had a rough start to the 2000-2001 season, due to injury. Nabokov used the opportunity to firmly entrench himself as the Sharks’ starter. Just prior the trade deadline, Shields would find himself, forward Jeff Friesen and a 2nd round pick, sent to Anaheim for Teemu Selanne.

“Kipper” was taken in the 5th round of the 1995 draft and got called up once Shields was moved. Like Nabokov, Kiprusoff’s first win would be a relief appearance in a 7–4 win over the Mighty Ducks of Anaheim. His first NHL start would come 11 days later, on April 8, with another victory over Anaheim.

At the start of the 2002–03 season, Nabokov was holding out for a new contract, which ultimately gave Kiprusoff a chance to take the reins. However, Miikka lost his first three games and would struggle through the season, posting a .879 save percentage and 3.25 GAA over 22 games.

During this “Sutter era”, the Sharks were a bit of a goalie factory, driven by the beloved Warren Strewlow. Beginning the 2003–04 campaign, Vesa Toskala emerged to compete with Kiprusoff for the back-up role. Kiprusoff would end up playing no games for the Sharks this season as Toskala started 4 of the first 18 games. On November 16, 2003, the Sharks traded Kiprusoff to the Calgary Flames in exchange for a second-round draft pick. That pick would ultimately become Marc-Édouard Vlasic.

In another odd coincidence, Kiprusoff and Sutter would face their former team in the 2004 Western Conference Finals just a few short months later. The Flames would go on to win the series against San Jose in 6 games but would fall in the Final to the Tampa Bay Lightning.

Let me preface this with the fact that I’m a huge Nabby fan. However, based on the numbers, the Sharks should have traded Nabokov and kept Kiprusoff. Nabokov had higher trade value which means the Sharks perhaps could’ve gotten more in return. Let’s have a look at the numbers of both goalies during their time with these clubs, per Hockey-Reference.

Over these 6 seasons, you can see that their save percentages are almost identical while their GAA is identical. Most noteworthy is that Kipper posted these stats while starting 47 more games and facing 1763 more shots. Nabokov also had far more goal support as San Jose posted 1486 goals to Calgary’s 1363. San Jose finished 4 of the 6 seasons in the top 10 of the goals-for category, finishing 11th during the 2003-2004 season. In comparison, Calgary finished in the bottom half of the goals-for columns 4 of the 6 seasons, including a dead last finish in 2010.

During this stretch, San Jose placed either 1st or 2nd in the Western Conference over 4 of these 6 seasons while Calgary’s best finish was 3rd. The Sharks also won their division 4 of 6 times while the Flames only won their division once. After their trip to the Final in 2004, Calgary never made it beyond the first round during this time. Meanwhile, the Sharks made it out of the first round all but once.

In the playoffs, Kiprusoff posted 6 shutouts in 52 games to Nabokov’s 5 in 63 games. Kiprusoff was a star on what were generally mediocre teams while Nabokov backstopped talent-filled Sharks teams, including a President’s Trophy win.

Darryl Sutter was clearly familiar with both goalies from his time in San Jose. Was this an astute move by Sutter? Did Wilson even entertain the idea of moving Nabokov in favor of Kiprusoff?

Would the Sharks have won it all with Kipper? Tell us in the comments below.