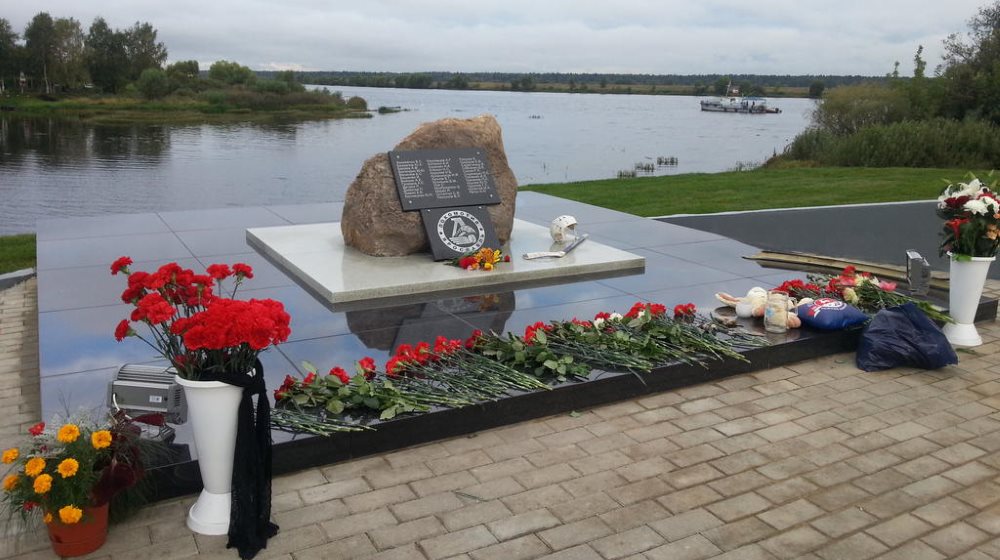 (This piece was originally written for Pucknology.net on September 7, 2016. The intro has been slightly modified for present reading.)

When I decided that I would write this piece 5 years ago, I knew that it would mentally take me to a dreadful place that is not fun to visit. Even though I was not personally affected by the tragedy in terms of friendship or family, the distress that comes from thinking about the Lokomotiv hockey club plane disaster is still overwhelming, even ten years later. How does one express the agony of the darkest day in hockey history? I did not want to simply restate what had happened. There have been plenty of news outlets that have done that. I cannot speak much about the legacies of most of the players, as information about their personal stories fades into the internet void as the years go by. However, for a topic in which I take very seriously, I decided that the best way to decompress was to simply write everything that I think about every year on this day.

6:50 a.m. I will never forget the time, let alone the date. It was Wednesday, September 7, 2011 at 6:50 a.m. I was half-awakened as my cell phone went buzzing against the headboard of my bed. This was before cell phones had an overnight ‘Do Not Disturb’ feature. “Arrrrggghhh…” I thought as I attempted not to wake up too much so that I could fall right back to sleep. Except then I started to wonder. “Nobody I know would text me this early if it wasn’t an emergency.”

Reluctantly I reached out to look at my phone and the text was from my friend, Jared. “Entire hockey team dies in plane crash in Russia,” it hauntingly read. “That’s awful. What team was it?” I groggily replied, or something to that effect. I thought perhaps that he meant that maybe a small local team had been involved in a commuter airline crash, which still would have been tragic. It could not have been a professional team though. The last time I had heard of any incident where a large team was killed was the Marshall University football air disaster in 1970. Professional sports clubs simply do not perish. Not that they cannot — it just does not happen in this era. One minute after the initial text came the next one: “Not sure. I think may be a KHL team.” I immediately jolted out of bed. 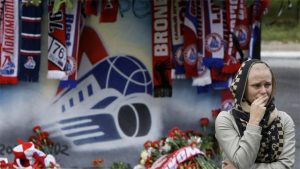 As someone who has paid more attention than most to overseas hockey leagues, I knew that whatever I was going to find out would most likely involve players that I had studied for years. Because the crash had only occurred 45 minutes earlier, it was difficult to get consistent information from half-a-world away. The news was true, though — at 4:05 p.m. local time, an airplane had crashed into the bank of the Volga River just outside of the airport in Yaroslavl, Russia. The Lokomotiv Yaroslavl hockey club was gone. Dads, sons, husbands, boyfriends, and heroes gone. I was in complete shock because I immediately knew of some of the players who must have been aboard the plane.

Karlis Skrastinš, the captain of the Latvian national team and the epitome of heart and soul. Skrastinš carved a niche as a shot-blocking machine, yet missed no games from 2000 to 2007 despite breaking his wrist in 2004. He once held the longest NHL ironman streak by a defenseman at 495 consecutive games played (now ranks fifth). Not bad for someone who was drafted as the 230th overall pick in 1998.

Ruslan Salei, another name who Sharks fans will remember as the long-time shutdown defenseman of the rival Anaheim Ducks. Salei captained the Belarusian national team when they stunned the world and eliminated Sweden from the 2002 Olympic games. He had joined Lokomotiv just two months prior, after playing over 900 games in the NHL. There was a brief glimmer of hope that Salei had not been on board the plane, with an unconfirmed report citing that he had traveled back early to be with his family in his home town of Minsk, Belarus, where Lokomotiv was flying to play. As much as I wished that rumor to be true, sadly it was not.

However, there was the one player who I could not stop thinking about; the one that made me numb thinking about; the one who I am in tears writing about right now. Pavol Demitra. “No, not Pavol,” I selfishly thought. I always had an admiration for Demitra dating back to when I first started watching hockey on a regular basis in the mid-nineties. When he was traded by the Ottawa Senators in November 1996 to the St. Louis Blues for Christer Olsson, I found it intriguing since Demitra was wasting away in the minors in a putrid Senators system and Olsson was a hot young prospect of the Blues. Par for the course for the Senators at that time, the trade ended up completely backwards. What Demitra proved is that sometimes players who you think are really talented should not be written off just because they are not at the level that they probably should be. When the Blues scavenged him from the minors just before the 1997 playoffs, he thrived right away and never looked back. 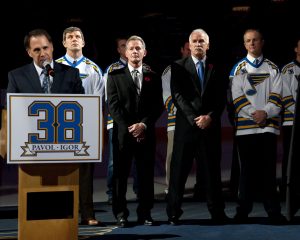 I became an instant fan of Demitra, thinking how brilliant it was that a player could go from being buried in the minors to being an NHL star over the course of one year. He was the perfect player to latch on to as my dedication grew for the sport. The thing is.. Demitra did more than be a nearly-point-per-game player in his NHL career. He was the figurehead of Slovakian hockey. Year after year, Slovakia attempted to compete with the other “elite eight” powerhouse hockey nations. While in most cases, the team was either not deep enough or not experienced enough to make an impact in tournaments, the player whose star always shined brightest was Demitra. He was more than willing to carry his nation on his back in 11 different tournaments. The inspiration he provided was why Tomas Kopecky and Zdeno Chara paid tribute to him when Slovakia stunningly won a silver medal at the very next World Championships. Now he was gone.

Three national team captains dead. I dreaded to look up the others who were not off the top of my head. I opened my personal KHL documents to get the full grasp on who else was likely on the plane. More names familiar to NHL fans were there:

The coaching staff who perished were also recognizable names: 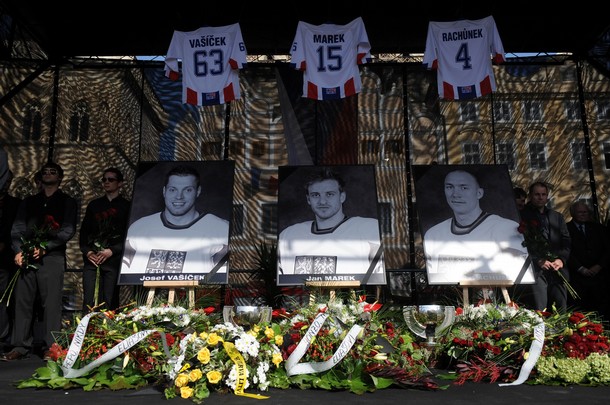 Something good had to come from this breaking news. Please. Anything.

Then the word came in — two people had survived the crash! Avionic engineer Alexander Sizov, who was not well, but alive, and Lokomotiv fan-favorite Alexander Galimov, who was found pulling the bodies of his teammates out of the river by a boat of fishermen. How anyone could have survived the explosion and crash was incredible, let alone having the physical and mental strength to do something so brave as he was. Galimov had suffered significant burns to over 80% of his body and was eventually placed in a medically-induced coma to stabilize the enduring trauma. He was able to speak with his father at the hospital for what ultimately was his farewell, Sadly, Galimov passed away five days after the crash. 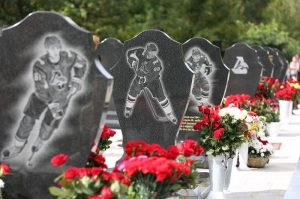 There was also one player who had not been on board the ill-fated jet. 20-year-old winger Maxim Zyuzyakin had stayed behind to play for Lokomotiv’s junior hockey team before he was to rejoin the main club. The internal struggle of knowing that all of your teammates died while you, alone, were spared must have been tremendous on the poor lad.

I struggled to grasp the situation and spent the day scouring for any updates I could on Galimov and others. I did not know what else to do with myself. Considering that I was a complete wreck, I suppose I was fortunate to not be scheduled to work that day.

I read interesting stories about some of the players who were lesser known to most North American hockey fans. These stories mostly revolved around the youth of the team and players like defenseman Yuri Urychev, who was both suspended and hurt at the time. Even though he could not practice or play, he chose to fly with the team because he wanted to show his support to them for their opening game in Minsk. Center Daniil Sobchenko, a rising prospect and Sharks draft pick just months earlier, had recently returned from a prospects camp in San Jose, and aspired to crack the Russian Olympic team for 2014. Sobchenko became engaged to his girlfriend the night before the crash. Both players were only 20 years old.

As the day wore on, the most heart-stopping story came out regarding Ivan Tkachenko, who had spent the previous ten seasons with Lokomotiv. It was leaked out that over Tkachenko’s tenure with the club, he had anonymously donated nearly ten million rubles (over $300,000 US, prior to the Russian economic collapse) to children’s hospitals to help pay for operations that families could not afford. Not only was this confirmed weeks later by Tkachenko’s family to be true, he had donated 500,000 rubles within a day before the crash to cover the medical costs of a teenage girl with leukemia. If I could ever afford it, I would happily carry on in Tkachenko’s footsteps. The world truly needs more selfless people like him, literally positively changing the lives of others. 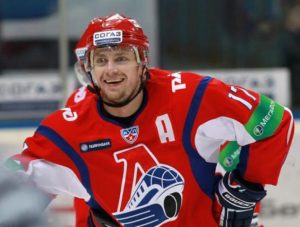 I have worn my red ‘Love For Lokomotiv’ bracelet every day since making a small donation to support the families of those who were lost. I wear a remembrance sticker on my hockey helmet and include a salute to them before and after each game that I play. I may only be playing amateur hockey and it may not sound significant, but to me, I continue to play hockey and they cannot and it is my way of showing gratitude for that.

Just a couple of days before the accident, a fan made what was to simply be a highlight video of his favorite team for the start of the KHL season. Instead, it turned into legacy video, which was played across many media outlets and even at the memorial service for the players at Arena 2000 in Yaroslavl. I watch it periodically, not just as a reminder of that awful day, but also for the joyous moments that these players brought fans. I think that is something these players would want to be remembered for and I encourage you to watch it.

You do not ever get over something so terrible as the plane crash on September 7, 2011, but I hope that the families have been able to move on and can enjoy the memory of their lost loved ones. The tragedy is a deep reminder to appreciate life and the people that you love. In 2014, NBC aired a magnificent documentary on the recovery of the city and the club since the crash. In the wake of this tragedy, people can grieve but persevere. It has been five years since that dark day and Lokomotiv lives on. Whether you look at pictures of the permanent memorial sites in Yaroslavl, read an article about a player, or revisit the ghastly news clips from that very day, it is important to reflect every September 7. The 44 people who are gone did not deserve to die, though they do deserve to be remembered for what they gave the world. 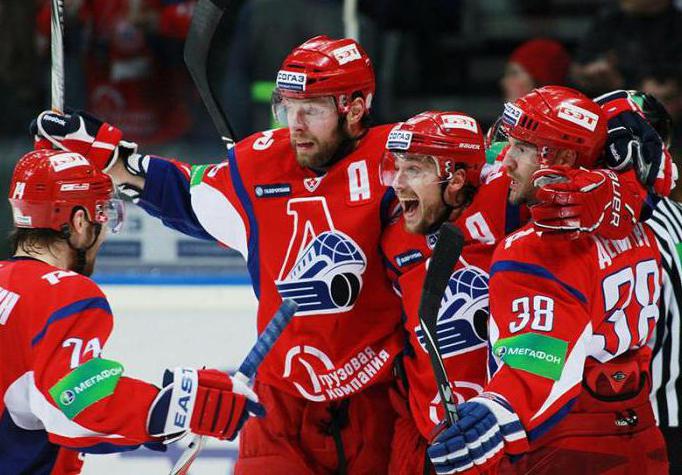 SPORTSNET – The Team That Disappeared

RT – The Lucky One: Maxim Zyuzyakin