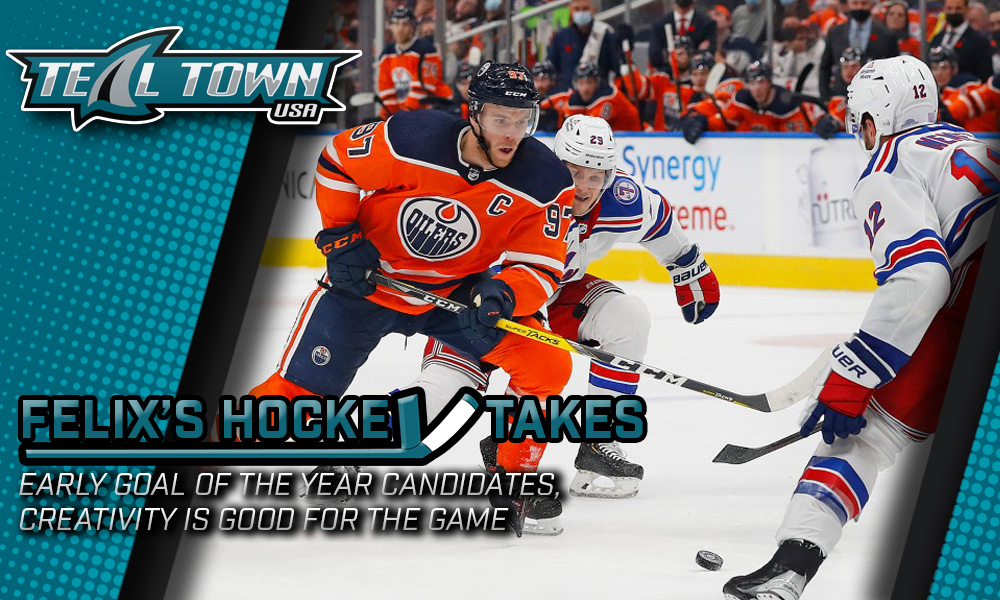 Early Candidates for Goal of the Year

As we approach the halfway point of the NHL regular season, we’ve already had some very nice goals, including a few very worthy “Goal of the Year” candidates. The top pick, for now, starts with Connor McDavid’s ridiculous goal 1-on-4 versus the New York Rangers to, more recently, the Zegras-to-Milano alley-oop goal for the Anaheim Ducks and Cale Makar’s overtime winner against the Chicago Blackhawks. Let’s take a look at each.

What is there to say about the Edmonton Oilers’ captain that hasn’t already been said at this point? The former 2015 first overall pick is a speed demon and a magician with the puck. He can stickhandle in a phone booth and it seems like McDavid is making highlight reel plays every season. Just when you think you’ve seen the best of Connor McDavid, he proves you wrong. This year, it’s no different.

If anyone remembers this goal from 2015 against Columbus, this was when McDavid came back from that collarbone injury and said “what injury?”:

More recently, here’s McDavid effortlessly going through the Toronto Maple Leafs and going top corner on a coast-to-coast goal in the 2020/21 season:

Finally, let’s look at the potential goal of the year from earlier this season, in November 2021, when McDavid outdoes those two prior goals altogether:

Let’s break down how this happens. It starts off with a shot off the crossbar by Tyson Barrie. The Oilers have had plenty of offensive zone pressure to this point. Puck’s rolling out of the zone.

Now, here’s McDavid trying to hold the puck in the zone, but being unable to.

And then he says “Forget it, I’m doing this myself”. The rest is history.

What’s even more impressive about this goal is the timing of it. The Oilers were down a goal. The Rangers were leading 5-4 in the third period with 2:59 left. McDavid tied it up with about three minutes remaining in regulation taking on four Rangers defensemen. That’s incredibly impressive.

Zegras was highly touted as a future star in this league when he was drafted ninth overall by Anaheim in the first round of the 2019 Entry Draft. Here’s an example of his skill.

The puck is in Buffalo’s zone as Rikard Rakell (in white) skates after it on the forecheck.

Rakell then slides the puck to Zegras.

Zegras then decides to try the alley-oop pass when everyone is thinking he’s attempting “The Michigan”. He tosses the puck to Sonny Milano, who bats it in to take the 1-0 lead for the Ducks.

On replay, yes, Milano did get his stick on the puck.

Cale Makar is a very talented offensive D-man for the Colorado Avalanche who was taken at fourth overall by the Avs in 2017. For this third potential goal of the year, he shows off his elite skating ability and silky smooth mitts.

Here he is (in white) with the puck, skating out from behind the net.

As he glides towards the half-wall, he assesses his options and lures Kirby Dach (#77 in red) towards him. At the last second, he puts on the brakes and pirouettes away from Dach, catching him flat-footed.

Makar then skates in on Fleury and goes for a backhand-forehand deke before scoring backhand, top shelf on the Chicago netminder.

Because one look at this beautiful goal isn’t enough, here’s a replay.

Goal of the Year for Me (So Far)

So, which is the goal of the year so far? The crazy thing about this league is how insanely high the skill level is in today’s game. There have even been some insane goals I didn’t even mention in this list, such as Matthew Tkachuk’s between-the-legs goal against the Rangers. All three goals require an incredible amount of skill, whether it be skating or stickhandling.

That said, Connor McDavid is simply in a league of his own. The way he skates, cutting back or eluding, and cutting through or past defenders to score on a near nightly basis, is something we don’t often see in the NHL. His speed, his precision with his shots, and his hands combine for a very, very lethal weapon that boosts him to the top of the league with some very special players, including that of Sidney Crosby. Say what you will about his commitment to defense. McDavid’s offensive prowess makes him arguably the best offensive player to lace up the skates in a long time.

Now, I know what some of y’all are going to say. I’ve seen the comments on social media. McDavid is only good because the NHL is “soft” now and that there’s no hitting anymore in the game. That brings me to my next point.

Creativity is Good For the Game

Much has been talked about how the NHL can better sell the game. This is how. No one is taking away the physical aspect of it because hockey is a contact sport. You’re still going to see players getting hit every now and then. However, with the way the rules have changed over time, creativity in this league is on the rise and it’s definitely a good thing. Are there times when players shouldn’t be dangling around four defensemen like Connor McDavid? Absolutely. The name of the game is puck possession and fancy moves aren’t always going to work. But again, when executed well, such creative plays make for some absolutely highlight worthy goals.

Contrary to John Tortorella’s opinion, creativity is absolutely good for the game. Since the Zegras’ assist went viral, hockey players at various levels have been attempting to score the same way.

Omg HOW did I not think of this as soon as Zegras passed it over the net??? From the Women’s Worlds this summer https://t.co/UG6dGdMIig pic.twitter.com/P4TzOixqyA

We’ll never get tired of seeing this one, now complete with @NicholasMarek on the call! 😍 pic.twitter.com/91O3xTDTcF

It’s pretty awesome, honestly. We shouldn’t be bashing creativity, but rather encouraging it.