The San Jose Sharks placed Evander Kane on unconditional waivers for the purpose of terminating his contract on January 8th, 2022. Kane, in the fourth year of his seven-year contract, has $22,885,000 still owed on his deal per CapFriendly.com.

The Sharks have informed Evander Kane that he has been placed on unconditional waivers with intent to terminate his contract.https://t.co/Q35WBcy5Uz

The reasoning for the termination is a violation of the AHL’s COVID-19 protocols although the exact nature of the infraction has not been released by the team at this time. Kane was suspended earlier in the season for 21 games for violating the NHL’s COVID-19 protocols. This was for allegedly submitting a fake vaccination card to the team although neither the league nor the team confirmed this. Upon the completion of his suspension, he was assigned to the San Jose Barracuda where he has remained. He played five games before being placed in the COVID Protocol before today’s announcement.

The Sharks’ Evander Kane contract termination stems primarily from him traveling to Vancouver while COVID positive, according to multiple sources.

NHL Deputy Commissioner Bill Daly when asked for comment said “I can say we are satisfied that they have adequate grounds to terminate.” per SJHockeyNow’s Sheng Peng.

Bill Daly, on NHL's position on #SJSharks terminating Kane's contract: "I can say we are satisfied that they have adequate grounds to terminate."

It’s hard to imagine the Sharks making such a move without consulting the league offices as when the news broke many suggested the NHLPA would file a grievance. Hours after the initial announcement was made, the NHLPA stated their intentions to file a grievance, setting up a showdown between Evander Kane and the San Jose Sharks.

We are aware of the San Jose Sharks’ stated intent to terminate Evander Kane’s contract. The NHLPA intends to challenge any such action by filing a grievance.

We are aware of the Sharks’ decision to put Evander on waivers for contract termination. If he clears, we will file a grievance. The Sharks do not have sufficient grounds for taking this action. #WeAreGoldStar!

While the NHLPA filing a grievance on behalf of Kane won’t be a popular decision, it’s important to note that they do not have a choice of picking and choosing who they do and don’t defend. Situations like this are about precedent and if the Sharks are successful in terminating Kane’s contract now, it will make it harder for the players association to prevent this from happening to another member in the future.

Authors note: Many people have brought up Slava Voynov who had his contract successfully terminated by the Los Angeles Kings. The difference between his situation and Evander Kane’s is that the NHLPA did not file a grievance on Voynov’s behalf. The reason for this was that Voynov opted to leave the country rather than face a deportation hearing which left him unable to fulfill his contract. His termination was a much more open and shut case. Sorry for the omission of this information when the article was initially posted – Ian

So what happens now?

The first thing that needs to happen is for Kane to clear unconditional waivers so that the termination can become official. It’s hard to imagine a team claiming Kane with all the controversy surrounding him at this time so this is likely a formality. Once the termination is official, then the NHLPA can file its grievance. Things will get interesting once that is completed.

This is not completely uncharted waters for the NHLPA as they filed a similar grievance once before on behalf of Mike Richards. Richards, then a member of the Los Angeles Kings, had his contract terminated in June of 2015.

Article 17 of the NHL/NHLPA Collective Bargaining Agreement states that in this situation that a neutral arbitrator will rule on this matter in favor of either Evander Kane or the San Jose Sharks.

Should the arbitrator rule in Kane’s favor, the Sharks would owe him the remaining money left on his current contract. This would mean the Sharks would also have Kane continue to count against the Salary Cap. If the arbitrator ruled in favor of the Sharks, Evander Kane would lose the remaining money owed to him from his contract as well as any future signing bonus owed to him ($4 Million).

The most likely scenario however is that the Sharks and Kane come to some sort of settlement before the arbitrator hears the case. As noted above, an arbitrator’s decision is going to be completely in favor of one side. If you’re Evander Kane, you lose $22.8 Million dollars. If you’re the Sharks, you risk having a significant cap hit for a player no longer on your team.

In the case of Mike Richards and the Los Angeles Kings, they decided to go to a settlement three months after the contract was terminated but before the case reached arbitration. While the terms of the agreement were never released the impact on the King’s salary cap (image below) was far less punishing than the King’s being responsible for his full salary. It should be noted though that they will continue to have a small cap penalty until the 2031-32 season. 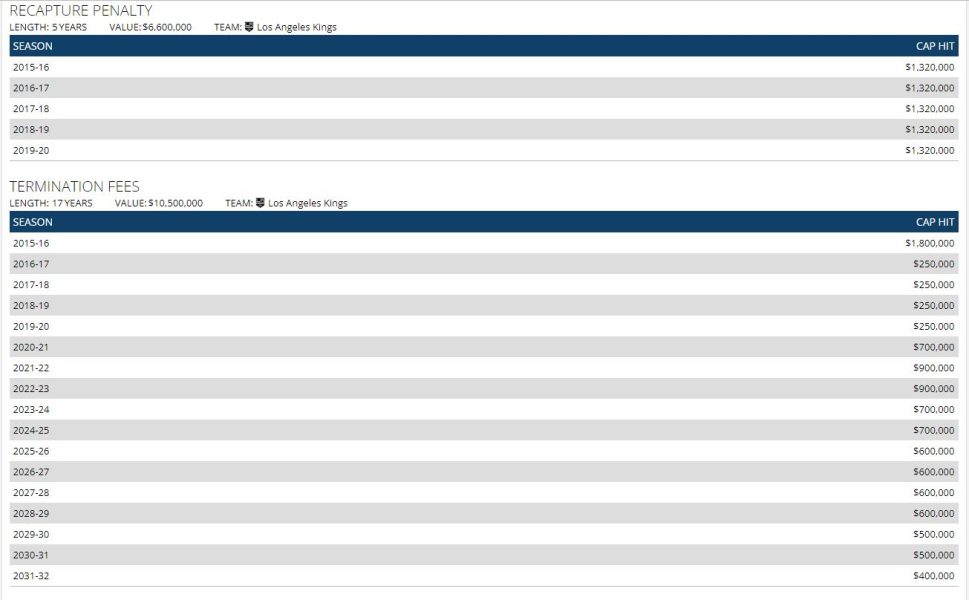 While we are purely in speculation territory now, I’d expect the Sharks and Kane to follow this path. I think the penalties the Sharks may face could be slightly higher based on salary cap inflation. Still, for the Sharks, that would be far more palatable than retaining large amounts of Kane’s salary in a trade or the cap penalty they’d face for 6 years if they were to buy out his contract in the spring.

Evander Kane’s days as a San Jose Shark are numbered but the true fallout from today’s events are still to come and it should be fascinating to watch it all unfold.