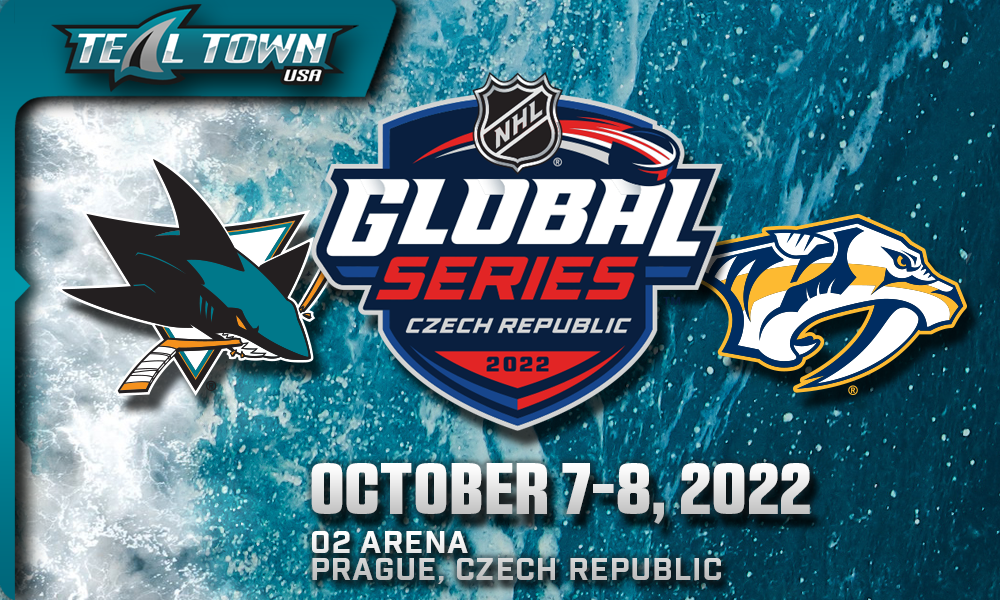 The National Hockey League announced early this morning that the San Jose Sharks will be one of four teams to begin the 2022-23 Regular Season in Europe.  Team Teal will take on the Nashville Predators on October 7-8, 2022 in Prague, Czech Republic at O2 Arena.  For Czech born Tomas Hertl and Radim Simek, they get to play a pair of NHL games on home soil.

Prior to their games in Prague, the Predators and Sharks will complete their training camps in Europe and will each play in an exhibition match as part of the 2022 NHL Global Series Challenge. The Predators will report to Bern, Switzerland, and play an exhibition game against SC Bern at PostFinance Arena on Monday, Oct. 3. The Sharks will report to Berlin, Germany, and play an exhibition game against Eisbären Berlin at Mercedes-Benz Arena on Tuesday, Oct. 4.

For the Sharks, this will be the third time the team will begin a regular season outside North America.

San Jose played a pair of games to begin the 1998-99 season in Tokyo against the Calgary Flames.  The venue was originally built for the diving competition at the 1964 Summer Olympics.  In rare pictures you can see the diving platforms near the sheet of ice that was built over the pool. This prompted then Calgary Flames star forward (and Sharks nemesis) Theo Fleury to ask, “if you climb up on one of those things and jump, do you get two minutes for diving?”

The teams skated to a 3-3 tie on October 9, 1998. Mike Ricci would tie the game under three minutes left in regulation.  Joe Murphy would get the first ever Sharks goal scored outside North America.  Scott Hannan made his NHL debut and had a pair of assists.  For the logo and  jersey enthusiasts, Calgary debuted their black third sweaters in this game.  Yes, this is where “Blasty” made it’s debut.  For the Sharks, this was the game they officially debuted their Nike, white second generation jerseys with shiny Deep Pacific Teal shoulders and arms. 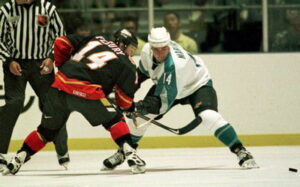 The next night, the same two teams played again, with the Flames winning 5-3.  Theo Fleury would have a five point game including a hat trick.  Tony Granato would get a goal in the third period, which was assisted by Sharks legend Jamie Baker.  For “Bakes” it would be his last NHL game.  For the two games it was brother vs. brother.  San Jose was beginning it’s second season with Darryl Sutter behind the bench, while Calgary had Brian Sutter as head coach. 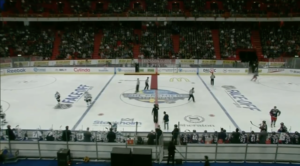 The Sharks’ 20th season would begin in Sweden as San Jose took on the Columbus Blue Jackets. The teams would play a set of back to back games at the Ericksson Globe Arena in Stockholm.

The first game on October 8, 2010, featured a four goal first period. Torrey Mitchell got things going early with a wraparound shot, then later midway through, Joe Thornton took a slapper that beat Columbus net minder Steve Mason.  However, the Blue Jackets would score two goal in 15 seconds on new Sharks goaltender Antti Niemi to tie the game up at 2-2.  Logan Couture would score the game winning goal on the power play, as the Sharks would get their first win outside North America, a 3-2 victory over Columbus.

The next day, Antero Niittymäki would debut for San Jose in net.  Devin Setoguchi got the opening goal just two minutes, and the Sharks had a brief 1-0 lead as Columbus would tie it a minute later on a Rick Nash goal. Team Teal would tie it up two minutes after the Blue Jackets took the lead five minutes into the third period on a Joe Thornton goal.  (Jumbo with two goal in two games, one of which was a slapshot?!)  The Blue Jackets would win in overtime as Ethan Moreau beat Niittymäki for the winner.

Joe Thornton made his debut as Sharks captain in these two games.  The highly talented squad began their journey another Pacific Division championship and would beat Los Angeles in 6 games, and Detroit in 7 games, to an eventual second consecutive Western Conference Final appearance vs. Vancouver.

It’s always great to see the Sharks expand their fanbase.  With Hertl and Simek going home to play in October, it’s a great opportunity to turn Czechia teal and create more memories all over the world.  It wouldn’t be a surprise if the Sharks would go on an Eastern Conference heavy road trip as they make their way back to San Jose.  Those details will be announced most likely in July.