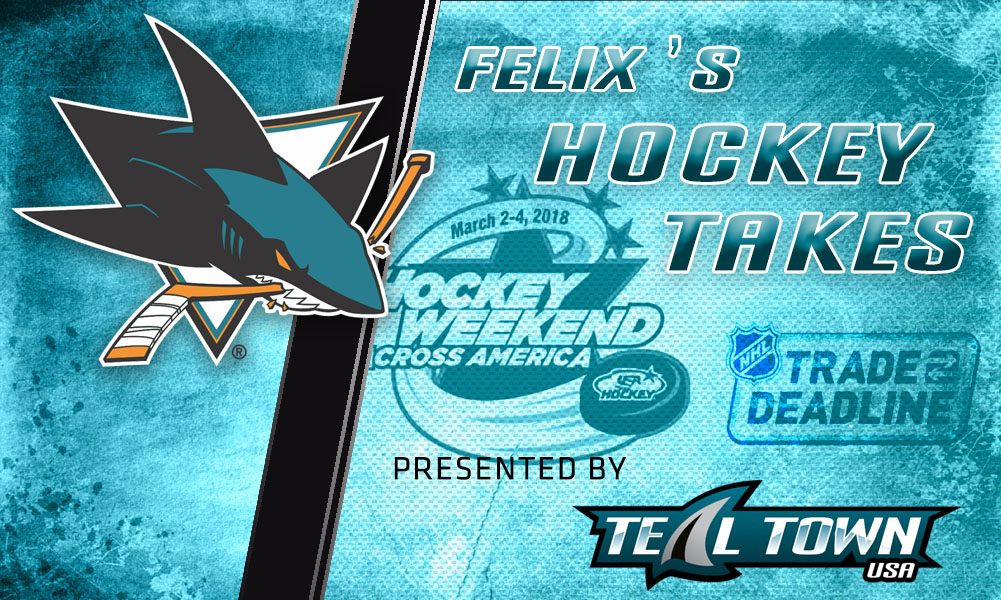 With the trade deadline having come and gone, I’ll briefly talk about the San Jose Sharks acquiring Evander Kane. I’ll also get into the start of the Seattle season ticket drive for the newest impending expansion team in the NHL, as well as my thoughts on Hockey Weekend Across America.

You’ve heard it by now. The Sharks acquired the 26-year-old left winger from the Buffalo Sabres for Danny O’ Regan, a 2019 conditional draft pick, and a 2020 conditional draft pick. You can check out in-depth thoughts about the trade from my fellow writer, Ian Reid, in the link just above this paragraph. I’m liking this trade more and more after two games. I had mixed feelings about it, obviously stemming from his previous off-ice issues but from just a pure hockey point of view, he certainly plays with an edge. He plays a hard competitive game and isn’t afraid to mix it up, but he’s also a scorer. He racked up two assists against Edmonton, and then another last night against Chicago on Joe Pavelski‘s second goal of the night. 68 of his 177 career goal totals came from Buffalo; he already has 20 this season. It’s unfortunate that we did have to lose a prospect like Danny O’ Regan, but that’s the price you have to pay to stay competitive. Will it be enough to get the Sharks far in the playoffs? No, I don’t think so, but it’s a hell of a boost to an already offensively-depleted lineup. Now he just needs to keep himself clean and out of trouble. It’s also worth noting that he will be a UFA after this season so whether or not the Sharks offer him an extension depends on what he brings both on and off the ice, which makes my previous statement all the more important.

The expansion process continues for Seattle. According to the NHLSeattle Twitter account, there were 25,000 deposits reserved and counting Thursday morning.

I don’t know about you but I have flashbacks of when Vegas Golden Knights owner Bill Foley was doing the ticket drive as well three years ago. Either way, as a hockey fan, this is awesome. While the questions remain whether or not the NHL Board of Governors actually approves the newest expansion team in Seattle, and whether the Arizona Coyotes stay in Arizona after this (a topic for another time) remains to be seen. I’m really curious to see how Seattle does in its first year. Of course, they did have an NHL team eons ago called the Metropolitans, that won the Stanley Cup in the NHL’s inaugural season in 1917.

In a perfect segue into next topic, this weekend is Hockey Weekend Across America! According to the Hockey Weekend Across America website, today is Wear Your Favorite Hockey Jersey Day. Saturday is Try Hockey For Free Day. Sunday is Local Hockey Heroes Day. I’ve always emphasized growing this sport. I love hockey as do a lot of others. I’ve always thought that Hockey Weekend Across America is a great way to promote the game in this country. Look at how many teams we have here in the U.S. now. Look at how many American-born hockey players play in the NHL now. Furthermore, even when the NHL said no to the Pyeongchang Winter Olympics this year, look at how well the gold medal game between Team USA and Team Canada did for women’s hockey as far as ratings go for NBC. It’s huge. So, I absolutely love Hockey Weekend Across America. Also of note, the Washington Capitals and Toronto Maple Leafs will be playing at Navy-Marine Corps Memorial Stadium in Annapolis, Maryland as part of the Hockey Day in America on Saturday. That game will be airing on NBC at 8 PM ET (5 PM Pacific).

That being said, I do have one suggestion. I really wish USA Hockey would consider having Try Hockey For Free Day for both kids AND adults. Right now, it’s just for kids, and while it’s great to start the kids up early in sports and especially in hockey, us adults want to give it a shot too! I mean, personally, going to Gretzky Hours at Sharks Ice is great and all but I personally feel like there would have much more of a community if adults could try it out for free as well. Hockey is an amazing sports, so that opportunity shouldn’t be wasted.