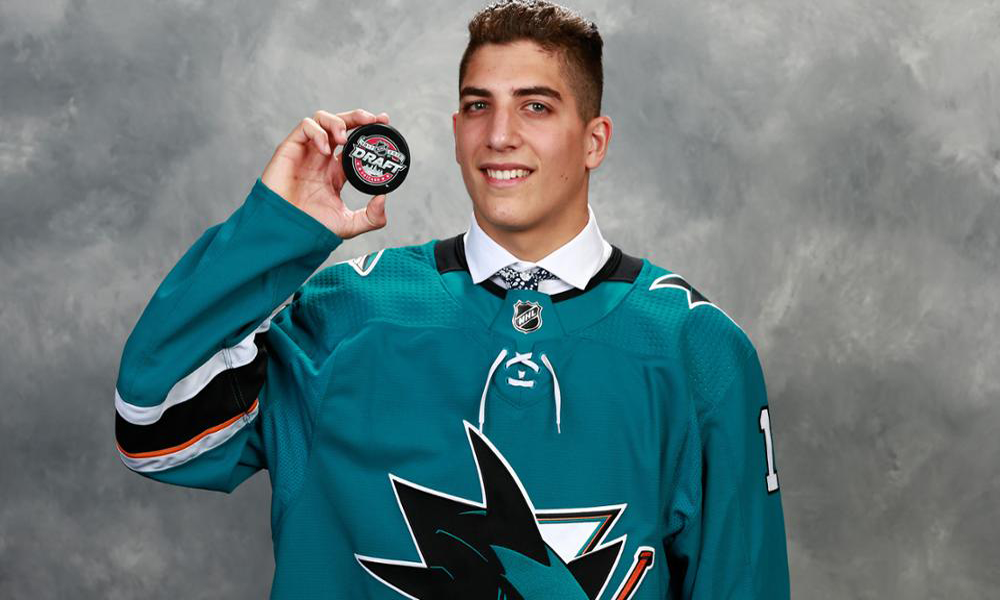 This past week the San Jose Sharks signed 20 year old defenseman Mario Ferraro to his first professional contract. Mario was originally taken by the San Jose Sharks with their 2nd round pick (49th overall) in the 2017 NHL Entry Draft. You could immediately see from his draft day interviews that Mario was overflowing with confidence which is also very evident in his game on the ice. Living in NYC and being a UMass alum, I’ve been able to watch Mario regularly over the past 2 seasons and have been very impressed with not only his skills, but also his development. Here is a look back at Mario’s 2 seasons with UMass.

Mario committed to the University of Massachusetts and entered the university as a freshman for the 2017-18 season along with Avalanche prospect (and now NHLer) Cale Makar. For much of their freshman year, the two highly regarded recruits played together on the top D pairing as well as the top power play unit. Ferraro set a new program record for points by a freshman defenseman with 23 and was second on the team in blocked shots. He showed great abilities in both ends of the rink, but his hustle and heart were what impressed me the most. Ferraro was selected to the Hockey East All-Rookie Team. In the season prior to Ferraro and Makar joining the program, UMass had a record of 5-29-2. It appeared that UMass had something brewing as the program improved to 17-20-2 during the 2017-18 season. This improvement, while not quite up to the standards of the top programs in Hockey East, was a big step for UMass who had been struggling for a good 7 years. The students as well as the large alumni base throughout New England was suddenly energized. 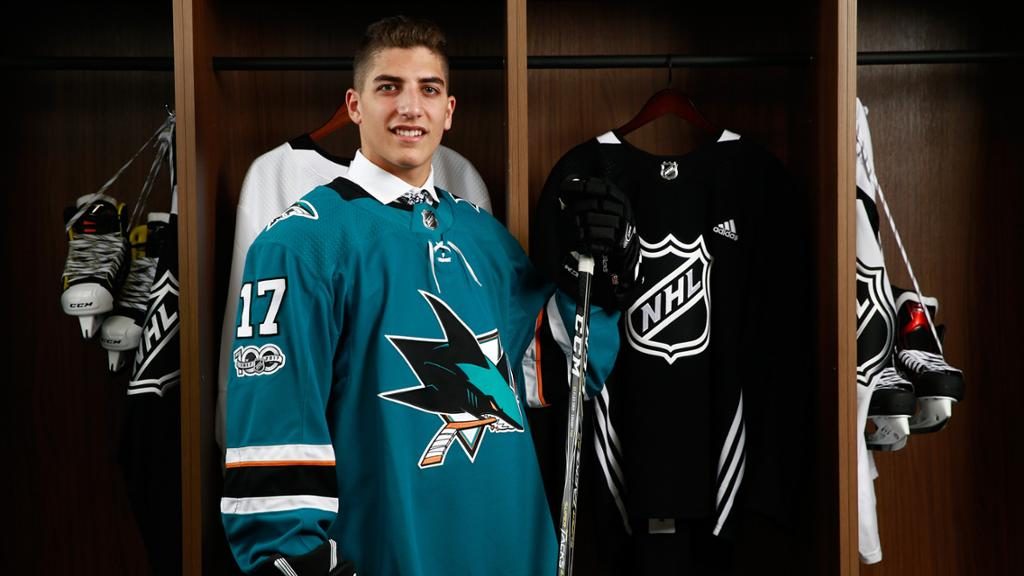 For the 2018-19 season, Ferraro was given an “A” on his jersey by Coach Carvel and became one of the team leaders despite being only a sophomore. His point production declined but his game did not. In 41 games, he registered 14 points, including 2  goals, but his physical play and defensive abilities continued to develop. UMass had a defenseman they could rely on in all situations, whether it was the Power Play, Penalty Kill or final minutes of a game.

In an effort to spread the talent in the defensive pairings, Ferraro and Makar were split. UMass climbed the polls to their first ever #1 national ranking in December and spent the majority of the season in the top 5. UMass won their first ever regular season title in Hockey East and returned to the NCAA tournament for only the 2nd time, first since the 2006-07 season. The excitement didn’t end there for Ferraro and the Minutemen, as they advanced to the frozen four after beating Harvard and Notre Dame in regional play.

Ferraro was perhaps the best player for UMass during a regional game against Notre Dame as the defenseman registered an assist and 4 shots on goal but more importantly Ferraro completely shut down the attacking forwards of the Fighting Irish and advanced the puck with ease out of the defensive zone. Two weeks later in their first Frozen Four appearance in program history, UMass advanced to the National Championship game with a victory over Denver and another stellar game from Ferraro as he registered an assist and 3 shots on goal. Returning NCAA champions University of Minnesota-Duluth finally ended UMass’s title run with a 3-0 victory. UMass’s final record was 31-10-0. Ferraro finished the 4 NCAA tournament games with 2 assists, 11 shots on goal and 5 blocked shots. His final NCAA career stats were 6 goals and 37 points in 79 games, with a +12 rating and 167 shots on goal. 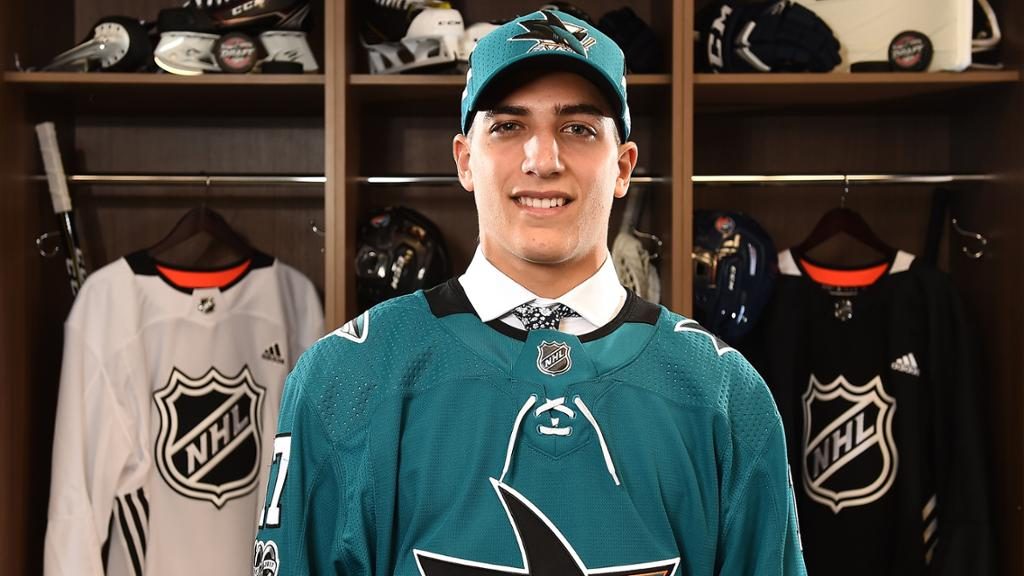 What do the Sharks have in Mario Ferraro?

I’m a bit torn on whether Ferraro could have used one more season with UMass. Greg Carvel is a fantastic coach who previously worked with the Ottawa Senators during the Erik Karlsson era. I think one last season being the focal point of the defense corps with Makar leaving for Colorado could have helped Ferraro develop further. The Sharks look to have plenty of defensemen with Burns, Braun, Vlasic, Dillon, and Simek signed for next season and free agent defensemen Erik Karlsson, Tim Heed and Joakim Ryan. The Sharks are also likely to retain Wood, Roy, DeSimone and Middleton with the Barracuda. This leaves the Sharks with 12 defensemen, but with Karlsson’s status completely unknown and rumors he could be getting over 10M per season, there is the possibility for several defensemen moving from the franchise due to cap space or looking for opportunities elsewhere.

This could be why Sharks management felt they had room for Ferraro next season and that it was time for him to make the jump. I definitely think Ferraro’s game translates well to the pro-game. He skates hard, fast and has near elite level top speed. He can sometimes look choppy with his stride but that is mostly due to his insane motor. He’s very strong on his skates. Ferraro has a solid shot and is reliable with making smart pinches offensively but still could use some improvements in his puck handling ability. I’ve seen him at times skating faster than his hands can react.

Defensively he has a good stick and great hockey IQ. While not tall (5’10, 190 lbs), Ferraro is a strong physical defenseman and can throw some big hits. I’ve heard some comparisons to Radim Simek in that regard but I’d say he has higher offensive upside. I think on the high end of Ferraro’s development he could be a top notch 2nd pairing defenseman who plays all situations and contributes 30-40 points at the NHL level. At the low end I still see him being in the NHL as a serviceable 3rd pairing defenseman or playing a role like Simek where he compliments a top guy like Brent Burns to form a strong pairing.

Ferraro has received praise across the industry. The Hockey News had him ranked number 100 in their annual Future Watch issue, and John Buccigross who is heavily involved in the College Hockey scene thinks with some seasoning in the AHL, the Sharks will have an NHL defenseman in Mario. Corey Pronman of the Athletic has also been impressed with Mario in past viewings. Personally, while Sharks top prospect Ryan Merkley has a higher ceiling, I feel more comfortable in stating Ferraro will be in the NHL. I think his floor is much higher than Merkley’s and his path to the NHL appears smoother. Due to this I’d rank Ferraro as the Sharks top defensive prospect. I expect him to spend next season in the AHL, but if he transitions well to the pro game, I wouldn’t be shocked to see him get a few games with the Sharks.