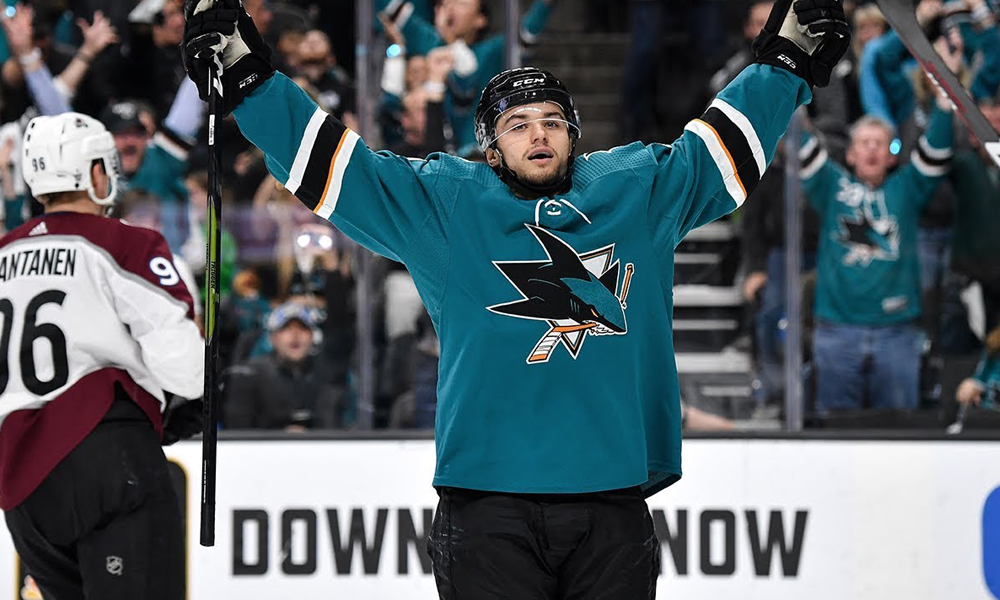 The San Jose Sharks have announced they’ve re-signed restricted free agent forward Kevin Labanc to a one-year contract. While the term of the contract appears odd at only one year, this makes Labanc arbitration eligible after next season. Financial details of the extension have not been released, per Sharks policy, but Kevin Kurz reports the deal to be $1 million.

Kevin Labanc’s one-year extension is for $1 million even. A bit shocking honestly

It should also be noted that Brenden Dillon, Melker Karlsson and Aaron Dell all come off the books next year along with the end of Paul Martin‘s buyout, freeing up $8.5 million next season.

With Labanc’s new deal on the books, this leaves the Sharks with $5,382,583 left in cap space. Current RFAs remaining without a deal are Dylan Gambrell, Maxim Letunov, Antti Suomela, Kyle Wood, and Nick DeSimone, according to CapFriendly. The Sharks are also expected to sign a new deal with Joe Thornton while former Shark Patrick Marleau remains an option.

San Jose Sharks general manager Doug Wilson announced today that the club has re-signed forward Kevin Labanc to a one-year contract. Per club policy, financial terms of the deal were not disclosed.

“Kevin took a big step forward in his production last season and has grown into an important part of our team here in San Jose,” said Wilson. “He’s always had a dangerous shot but really stepped into a playmaking role for us last season and improved his 200-foot game as well. We think he still has even more potential to tap into and we’re excited to see what he can do with an elevated role with this talented group.”

Labanc, 23, registered 56 points (17 goals, 39 assists) in 82 games in the 2018-19 season. Labanc set career highs in almost all offensive categories, including goals, assists, points, power-play points (20), game-winning goals (4), overtime goals (2) and games played. He finished tied for fourth among Sharks skaters in assists, tied for second in power-play assists (18), tied for third in power-play points and was one of three players on San Jose to finish the season with multiple overtime goals.

In 20 playoff games, Labanc recorded nine points (four goals, five assists) and one game-winning goal with 34 shots. In his second postseason appearance, he nearly doubled his offensive production and set a postseason career high in games played and notched his first career game-winning goal on April 26 in Game 1 of the Second Round against the Colorado Avalanche. Labanc also helped orchestrate the Game 7 come-from-behind win in the First Round against the Vegas Golden Knights on April 23. He factored on all four Sharks goals in regulation to become the first player in NHL history to record four points in a period during a Game 7, matched the NHL record for most points in any playoff period and became the 13th player in League history to post four or more points in a Game 7.

Over three seasons, all with San Jose, the forward has appeared in 214 NHL games and recorded 116 points (36 goals, 80 assists) with a plus-two rating. Labanc ranks 10th in assists and points among his 2014 NHL Draft class and is one of three players to be drafted in the second round or later to amass over 200 NHL games after being selected in 2014.

Internationally, he has represented the United States in the 2013 U-18 World Jr. Championships, as well as the 2012 World U-17 Hockey Challenge, winning a silver medal in both tournaments.

The five-foot-eleven, 185-pound native of Staten Island, NY, was selected by San Jose in the 2014 NHL Draft (sixth round, 171st overall).