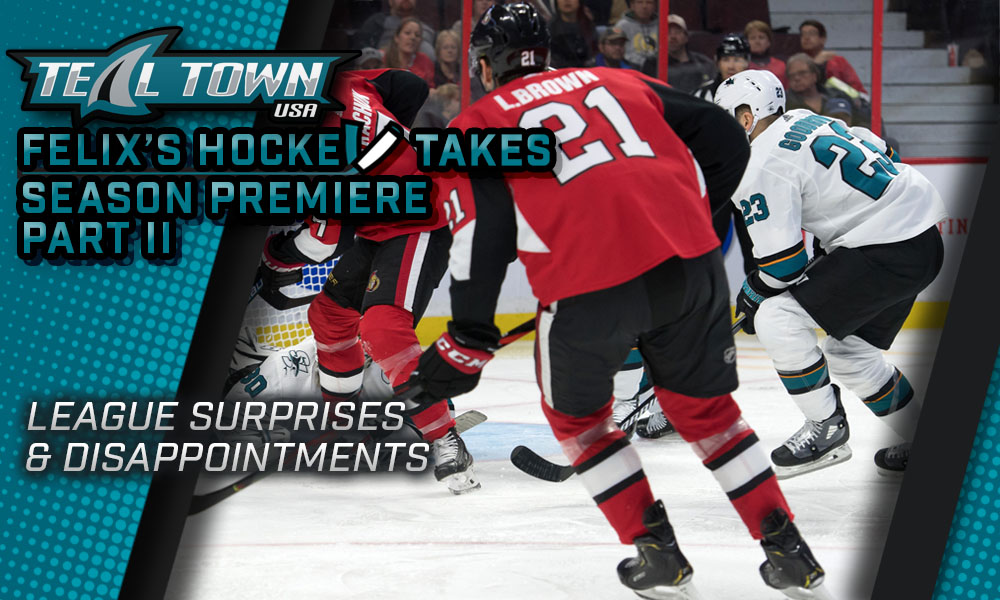 Welcome to the season premiere of Felix’s Hockey Takes. That’s right. FHT is back for another year, and we are now a month into the new season. If you haven’t already read part one of this two-part season premiere, check it out here. In part two, I’ll dive into surprises and disappointments around the league in the month of October.

Since this is the first edition of the season for FHT, coming into November, let’s briefly go over my thoughts elsewhere around the league for the opening month in the NHL.

Before the Edmonton Oilers started coming back down to the Earth recently, they were one of the hottest teams in the league. Oilers fans can thank Connor McDavid, Leon Draisaitl, and new acquisition James Neal for that. Neal was acquired in the offseason from Calgary for Milan Lucic. Draisaitl currently leads the league in scoring, with 13 goals and 26 points.

The Sabres finished the month of October with a record of 9-2-2, good for second in the Atlantic division. Captain Jack Eichel has led the way with 7 goals and 17 points, 9 of which have come on the power play. Both Eichel and Skinner are tied for the team lead in goals. Both Sam Reinhart (5 goals, 6 assists) and Rasmus Dahlin (1 goal, 10 assists) have 11 points. Viktor Olofsson leads the team in power play goals (6).

The New York Islanders have been among the hottest teams in the league as well. Coming into the month of November, they won eight straight games. They finished the opening month 8-3-0.

No Hangover in St. Louis

The defending Stanley Cup Champions finished the month of October 7-3-3. While it hasn’t exactly been bad, it hasn’t been great either for the St. Louis Blues. Coming into November, they scored 39 goals, but have also allowed the same amount of goals against. Still, it’s not enough to declare a championship hangover for the Blues.

The Kids Are Alright In Vancouver

The Vancouver Canucks end their month of October 8-3-1. The youth movement is more or less in full effect, with Bo Horvat being named captain. Currently, 2019 Calder Trophy winner Elias Pettersson leads the team in scoring with 18 points. Brock Boeser is not too far behind in second with 14 points, tied with a still-relatively-young J.T. Miller. Horvat has 11 points with the team.

No Bite in San Jose

I’ve said my piece about the team. See part one.

It seems like the acquisition of Joe Pavelski hasn’t helped the Dallas Stars as much as they thought it would. The Stars struggled out of the gate, losing 3 in a row before winning against the Caps in overtime. They’ve since picked it up a bit, winning 3 of their final 4 games to close out the opening month. Roope Hintz currently leads the team with 9 goals and 10 points. Tyler Seguin has 9 points. Alexander Radulov and Miro Heiskanen are tied with 8 points. The former Sharks captain has 7 points.

(Not that I’m one to talk as a Sharks fan, considering where the team is right now in the standings …)

But anyhoo, the only reason I have LA as a disappointment is because I honestly didn’t expect the Kings to suck as much as they have out of the gate. Their offense hasn’t been great. Defense hasn’t been great. Neither Jonathan Quick nor Jack Campbell have helped the cause. They finished the month of October in last place in the Pacific. The Sharks are literally just one above the Kings in 7th place with 9 points on the season.

The Tampa Bay Lightning being where they are in the standings surprises me. This is a team that’s a perennial playoff and Cup contender, yet it doesn’t seem like they’ve been able to put it together. The Lightning ended the opening month 6-4-2.

Andrei Vasilevskiy is currently sporting a .904 SV%, and 3.12 GAA in 9 games played, which isn’t bad but it’s not anything to write home about either. It is a little low. Curtis McElhinney, though smaller sample size at 4 games played, has a .899 SV%, and 3.93 GAA.

This is only the second team I couldn’t quite come up with a clever working subheading for. In any case, New Jersey starting off this season has been … oof. First round pick Jack Hughes hasn’t helped them much. PK Subban has been meh at best. Even Taylor Hall, who leads the team with 11 points, is getting heavy criticism from Devils fans.

The goaltending hasn’t been great either. In 5 starts, Corey Schneider has a 4.71 GAA, and .847 SV%. Huge yikes. Mackenzie Blackwood, who’s only started one more game than Schneider, is sporting a 3.22 GAA, and .876 SV%. This is a team effort, and I wonder where the Devils go from here.

A lot has happened early on this season. There have been many surprises and disappointments. Of course, I covered my thoughts on the Sharks in part one. This is going to be an interesting season.

One On One With Kevin Kurz – Halfway Through the 2021 Season