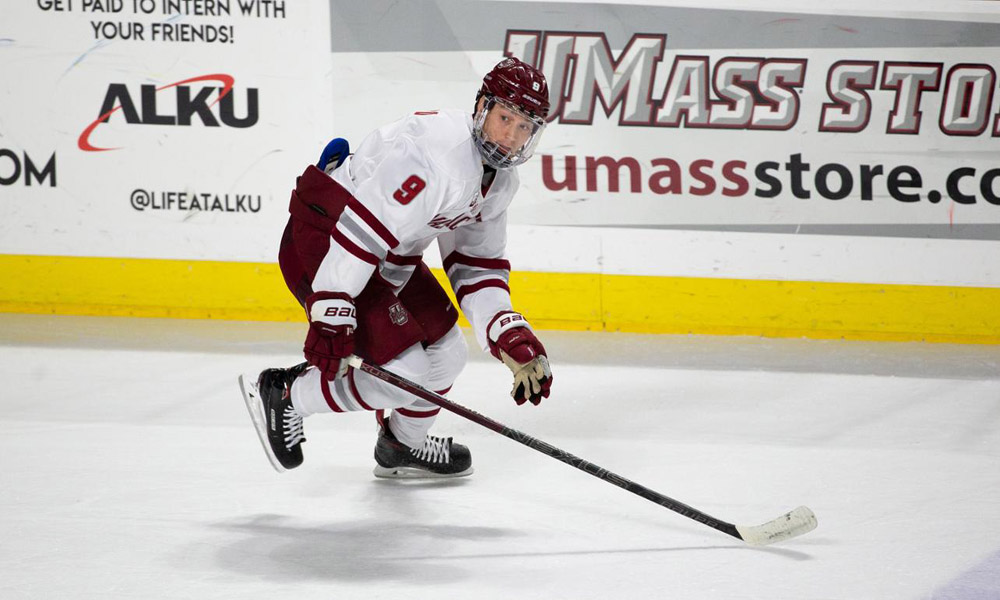 The San Jose Sharks are struggling offensively this season for goals scored per game, ranked 28th in the NHL as of this writing. However, they do have an exciting prospect in John Leonard climbing the college ranks. Doug Wilson and staff have a fairly impressive resume with late round picks making the NHL boasting names such as Joe Pavelski, Justin Braun, Nick Bonino, Jason Demers, Tommy Wingels, Dylan DeMelo, Joakim Ryan, and Kevin Labanc all having varying degrees of success at the NHL level. John Leonard could be another player to join this list. 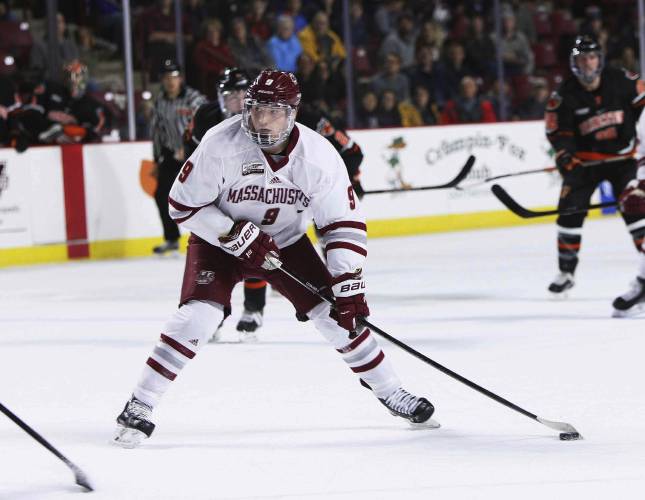 John Leonard was drafted by the Sharks in 2018, lasting until the 6th round, 182nd overall. At the time, he was a year older than most of the prospects picked, having been born in August of 1998. John had recently finished a very strong freshman season racking up 13 goals and 28 points in 33 games, leading the rebuilding UMass Minutemen in both categories despite missing 6 of the 39 games. Leonard also had a strong performance in the Hockey East Playoffs with 3 goals and 5 points in 5 games, bringing UMass to their first Hockey East Playoff series victory in 10 seasons. The UMass program was transitioning from Hockey East bottom dweller at the time but Leonard along with future NHL star Cale Makar and fellow Sharks prospect Mario Ferraro gave the fan base a lot to be excited about. One has to wonder if Leonard would have even been drafted by San Jose if the franchise hadn’t taken Ferraro a year earlier, as Sharks scouts have a history of drafting/signing teammates of players under the organizational umbrella.

As a sophomore in the 2018-19, Leonard helped lead UMass to the National Championship game where they ultimately lost to Minnesota Duluth. His production shot up to 16 goals (tied for 2nd on the team) and 40 points in 40 games played. During the season Leonard was voted Hockey East player of the week 3 times and was ultimately chosen as Hockey East 2nd team All-Star at the end of the season. He once again showed up in the big games registering 3 goals and 4 points in 4 NCAA tournament games. Leonard was named to the NCAA Northeast Regional All-Tournament team. Even as a sophomore he was developing into a leader for a team which was nationally ranked inside the top 5 for the majority of the season.

With UMass losing Makar and Ferraro to the NHL along with the leading scoring forward from the previous season, Leonard’s junior season was shaping up to be a huge test. So far Leonard has not disappointed. Through 29 games Leonard leads the team in goals with 20 and is 2nd in points with 27. His 20 goals are good for 2nd in the NCAA, 1 behind Griffin Loughran. He is freshly coming off a weekend series where UMass swept the number 10 ranked Providence and Leonard registered a hat-trick along with 2 assists. Despite the big name losses to the Minutemen roster they have remained among the top teams in the nation maintaining a top 10 ranking for all but two weeks of the season. Leonard is one of two UMass players in the running for the Hobey Baker Award given to the NCAA’s top player each season. 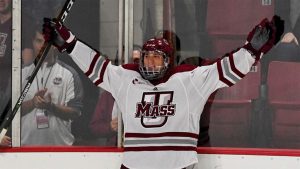 If you’ve followed the college hockey scene over the last few seasons you will have seen many of his goals via highlight reels. Leonard is the type of player who will bring you out of your seat at any given moment with his shiftiness and slick hands. This past weekend while registering a hat-trick, all 3 goals were highlight reel quality and pretty much done alone.

For the first goal Leonard received a pass at his own blue line, blazed up the ice, split the defense and went top corner over the Providence goalkeeper. The 2nd goal was even more impressive as UMass was killing a penalty. Leonard skated towards the attacking blue line, circled back to center ice to kill time, only to see some open ice, attack the Providence zone once again, freeze the defender and goalie with a  shot fake and then snipe far side top corner from the left-side circle. His third goal lived up to the first two as Leonard skated end to end, ultimately deked through a forward and two defenders in close range and went backhand to forehand while shooting under the goalies arm.

These highlight reel goals are nothing new if you’ve followed John Leonard. Simply look back to his playoff goal against Vermont as a freshman where he made #SCtop10 or his NCAA tournament goal last season against Notre Dame. 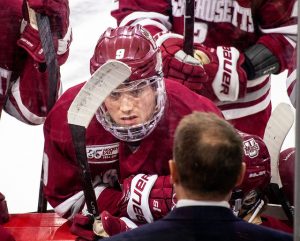 How does John Leonard project going forward? It’s tough to say this early in his development but with many viewings of his I do see an NHL future for him and wouldn’t be surprised if he developed into a skilled middle 6 forward for the Sharks. His numbers are impressive and continue to improve but his overall game is what really stands out. He thrives in big games and can carry the team. Leonard’s fantastic shot is only bested by his puck-handling abilities. He plays with patience and his vision is top notch. On top of the offensive production Leonard plays a decent two-way game as well. Ten years ago size might have been an issue as he is listed under 6 feet but he has a solid build, is hard to take the puck from and is a strong skater.

At the end of this season Leonard will have 1 more season of eligibility with UMass. He is one of the more dominant players at the college ranks so he will have little left to prove at this level. John has not indicated what his intentions are for next season, but his game indicates he could be ready to go pro and join the Sharks. With UMass having a team capable of going far in the post-season and the SJ Barracuda struggling mightily this season, he may not have a chance to get any games at the AHL level this season if he does elect to sign his first pro contract. It should be noted that Leonard was raised near UMass and has close personal connections to the University of Massachusetts. With the program getting stronger each season, he could be interested in returning for his senior season to chase more glory with the team he grew up supporting.