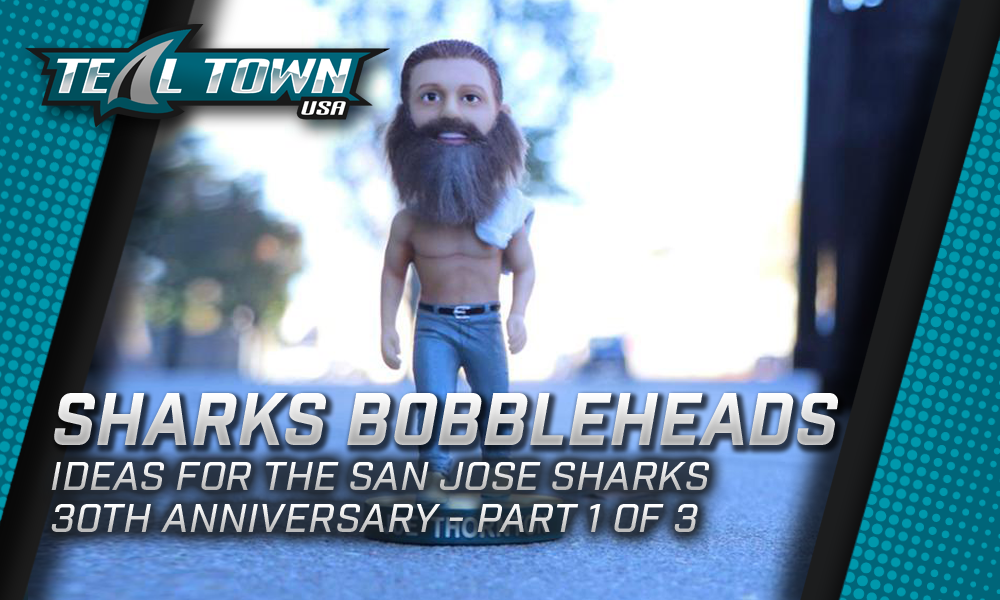 Now that this Sharks season is essentially over, let’s start thinking about next season with part 1 of a 3 part series.

We all remember April 25, 2011 when Joe Thornton scored 2:22 into overtime to give the Sharks a 4-3 win to close out a series vs the LA Kings in Game 6. Jamie McGinn received a 5-minute major and game misconduct at 16:37 of the third period for charging Brad Richardson. The Kings were on the power play for the final minutes of regulation.

Antti Niemi stopped four shots on goal to send the game into overtime. The Kings had 1:37 left on McGinn’s penalty, but never got a shot on goal. Just after the Sharks killed off the McGinn’s penalty, Thornton scored the winning goal and the “Jumbo slide” was born. Maybe you make the legs bobble instead of the head, but this moment should definitely be celebrated with a bobblehead.

In just his 3rd NHL game, Tomas Hertl would light up SAP like a roman candle as the rookie would post 4 goals against the New York Rangers in only 11:12 of ice time. After giving up 4 goals in the first half of a 9-2 San Jose rout, Henrik Lundqvist was pulled in favor of Martin Biron. Hertl would go on to score 3 more goals including a high-light reel, between-the-legs roof shot against Biron.

In the days following the game, several controversies took shape. Hertl was criticized by Adam Oates for being “disrespectful” of the league. Don Cherry claimed the goal would end Biron’s career, which it ultimately did. Two days after giving up the highlight goal Biron was waived by the Rangers. After going unclaimed, Biron retired from the NHL. The following May, Biron was nice enough to sign the stick and give it to Hertl.

However, the most controversial comments would come from teammate, Joe Thornton. Two days after the game versus New York, the Sharks were in Vancouver to take on the Canucks. Thornton would overhear a question posed to Marleau about Hertl “showboating”. Thornton appeared to take offense and offered an epic response.

“Shut up, have you ever played the game?”

When the press turned his way, he then added:

Sparking the comeback during the famous 5-minute power play in Game 7 against the Vegas Golden Knights, Logan Couture scored the first goal AND the third goal. Fans will remember his shouting of “THAT’S ONE” to the Sharks bench. But it was Couture’s tying goal that needs to be forever memorialized as a bobblehead.

With 7:07 left in the 3rd period, Couture would slide in alone from just over the blue line and bang home a tying goal to send SAP into hysterics.

Perhaps feeling a sense of relief or simply enjoying the moment, Couture extended his arms out, tilted his head back and soaked in the ravenous cheers. This moment is one of my favorite photos in Sharks history.

How do you not acknowledge the most memorable goal in Sharks playoff history? The Sharks were down 3-0 with 10:52 left in the 3rd period of Game 7. After a horrific injury to Joe Pavelski, the Golden Knights are assessed a 5-minute major penalty and become only the 2nd team in NHL history to allow 4 goals during a 5 minute penalty.

The Golden Knights eventually tied the game to send it to overtime. Despite sitting on the bench for nearly the entire overtime, Barclay Goodrow would blow by the Vegas defense on a nice feed by Erik Karlsson and score the game and series winner. It became bedlam at SAP Center.

I don’t care if Barclay’s head bobbles, his stick moves, or if they makes this into a figurine. but this moment needs to be captured in a fan giveaway. And it would be preferable if it occurred during a game against the Vegas Golden Knights.

I don’t know if there would be a licensing issue with Nintendo, but when Mario Ferraro donned what looks like a Super Mario hat with a Sharks logo during pregame, the bobblehead idea instantly struck everyone.

Ferraro just needs to spend his summer growing out an amazing duster on his upper lip and the Sharks will have the perfect giveaway for Columbus Day.

If the Sharks go with any of these options, I would certainly appreciate a couple of them being sent my way. 😉 You have the address. Look for part 2 and part 3 later this week.