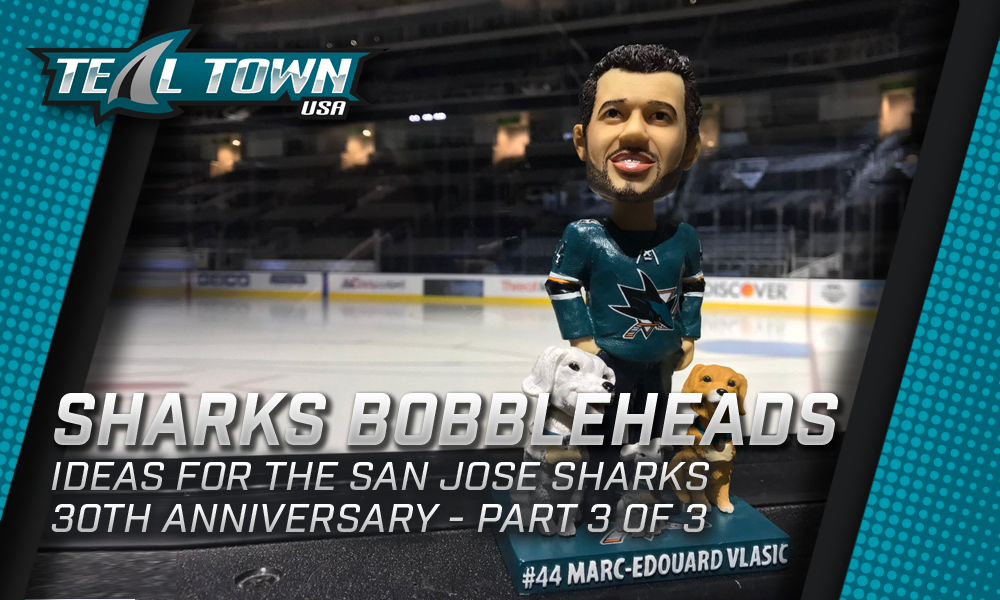 What Will Never Be

In the 3rd installment of this 3 part series, I focus on the San Jose Sharks bobbleheads that will likely never exist but would mark fun moments in the history of team teal. 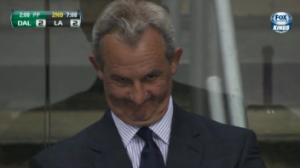 Former Sharks coach Darryl Sutter earned himself a rep for a few key things during his time in San Jose.

Darryl’s responses to media questions were some of the shortest yet, at times, funniest you’ve ever heard. His preference for grinders over skill players was unmatched. However, Sutter was a known master of the bitter beer face.

I don’t even care what the body of the bobblehead would look like as long as it featured Darryl’s bitter face. Aside from Drew Remenda, this is the Sharks coach bobblehead we all want.

In fact, while we’re talking about Darryl and Drew, check out this awesomely funny story Drew Remenda told us about the former Sharks bench boss. 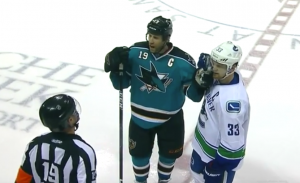 At the end of 2011, the Sharks were hosting the Vancouver Canucks. During a conference with the official, Joe Thornton saw an opportunity to troll Henrik Sedin.

During nearly the entire conversation with the referee, Thornton kept putting his stinky, gloved finger under Sedin’s nose. While Joe has had his share of troll moments, this is one that particularly stands out. Perhaps Thornton was using this opportunity to get under Henrik’s skin as a playoff match-up seemed inevitable.

Nevertheless, the fact that Sedin never really responded makes it all the more fun to enjoy. For this one bobblehead, I would make Sedin’s head bobble, constantly going back and forth towards Jumbo’s glove. 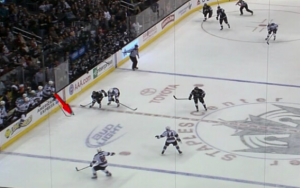 To finish of the 2011-2012 season, the Sharks had a home and home series against the Los Angeles Kings.

During the first game of the series in LA, the game was tied at 5-5 with 2:44 left in the game while the Kings were on a power play.

For some reason, Ryane Clowe felt this was an opportune time to play the puck from the bench. The Sharks would end up winning the game in the shootout as Joe Pavelski was the only one to score during the skills competition.

To this day, this bizarre play from Clowe has never been explained, but it would make a quite funny bobblehead, bench and all. 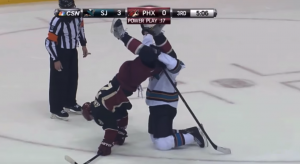 During a game between the San Jose Sharks and the Phoenix Coyotes on April 15th, 2013, Adam Burish and Oliver Ekman-Larsson found themselves caught in an awkward pose.

San Jose Sharks broadcasters, Randy Hahn and Drew Remenda, had a great time calling this bizarre moment during a game that was already essentially in the books.

Remenda coining the term “downward desert dog” was the cherry on top of this funny and odd moment. While we all have a good time playing the ‘desert dogs’ drinking game, this would be a fun concept. I guess you could make this a bobble-leg rather than a bobblehead?

Jumbo with a Rooster 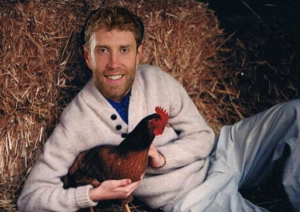 As I mentioned in the first part of this series, Joe Thornton provided a hysterically obscene response when he overheard a question about Hertl’s 4 goal game versus the New York Rangers in just Tomas’ 3rd NHL game.

While this might not make the best bobblehead, it’s certainly made a great meme and would be a funny idea for a Sharks cheer card, at the very least. Joe Thornton has made it clear he still has a lot of hockey left so let’s make it happen for the former captain. 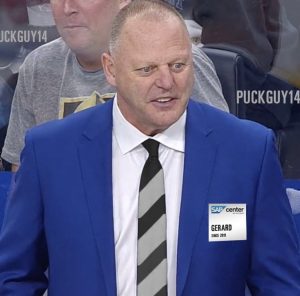 If you’ve ever seen a game at SAP Center, you’ve likely seen an arena usher or what locals call a “blue coat”. The usher uniform consists of black pants and shoes, a white shirt, a striped tie, and a blue coat.

During Game 6 against the Golden Knights in 2019, several Sharks fans kept checking their eyes as Vegas coach, Gerard Gallant, was wearing a nearly identical coat behind the bench.

It didn’t take long for our very own Erik Kuhre to fire up photoshop and have some fun. Aside from adding the grey stripes to Gerard’s tie, Erik was nice enough to give him a name tag too.

Again, maybe not a great idea for a bobblehead, but nevertheless a funny idea for something! Maybe everyone gets a novelty name tag?

While Patrick Marleau does not have a social media account, his wife Christina does. On occasion, she will share intimate moments from casa de Marleau. Last summer, Christina tweeted a particularly funny story about Patrick experiencing his first earthquake.

While it’s mind-blowing that Marleau had spent 2 decades in San Jose without experiencing an earthquake, wouldn’t this be a fun giveaway? Bobblebed anyone?

I hope you enjoyed this tongue-in-cheek series and checked out part 1 and part 2. Did you have a favorite? Was a moment missing? Let me know in the comments.