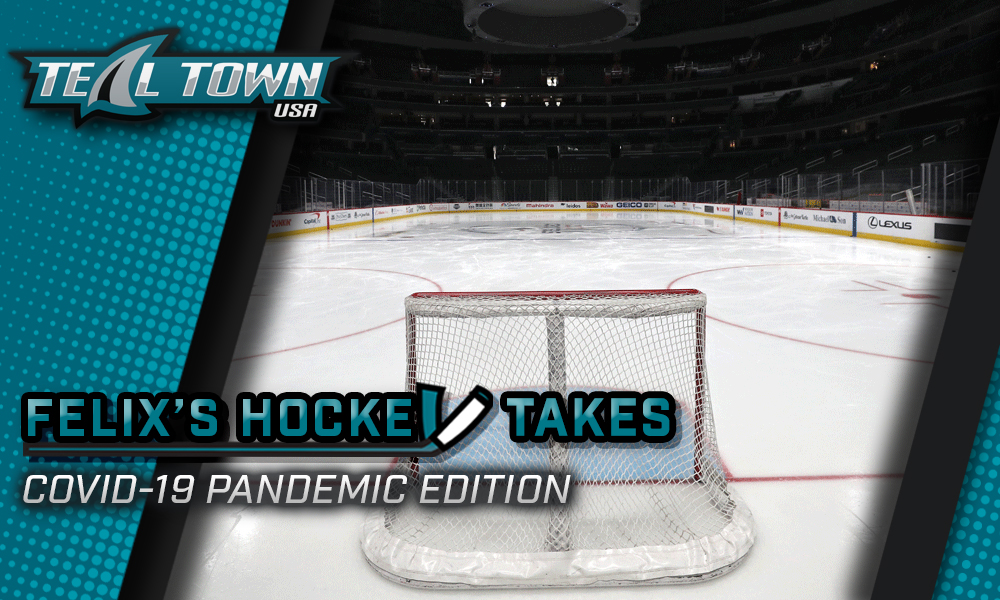 It’s been a weird, interesting, and rather unnerving three weeks to say the least. Usually, we are a San Jose Sharks / NHL website and podcast that’s built by fans, for fans. We love to dedicate our free time to talk about Sharks hockey, and the NHL. All of you know this as fans of the Teal Town USA After Dark postgame shows, the Teal Town Interviews, Q&As, and other website content we pump out weekly. However, this edition of Felix’s Hockey Takes feels different writing it, due to the serious nature of what I’m going to talk about.

Unfortunately, there won’t be another live episode of The Pucknologists for a while until this whole thing boils over and the light at the end of the tunnel becomes clearer. On that same token, I have no idea when Erik Kuhre will be hosting another edition of Teal Town USA Throwback After Dark. If anyone is interested, we do have a Discord server set up. Just message the Teal Town USA Twitter account (@TealTownUSA), and they’ll be happy to provide you with the link. As has been commonly said by reporters and insiders during this global health crisis, the situation is very fluid, meaning that anything can happen at any given moment.

A Brief Look at How We Got Here

So, let’s talk about the elephant in the room briefly before we get back to the sports perspective. A lot of us heard about the novel coronavirus when it originated in Wuhan, China, and never really thought much about it, even when it started spreading here in the United States. Of course, that’s not to say there weren’t at least precautionary measures taken to keep ourselves healthy and sanitary. Also, quite honestly, these precautionary measures should be a daily thing so shame on you if you’ve never bothered to wash your hands with soap every day, often.

Within just a couple days, the number of confirmed cases quickly grew by the numbers. One or two confirmed cases became a couple here and there. Worry, fear, panic, and paranoia spread across the nation like wildfire. Before we knew it, the sports world was shut down to slow the spread of the coronavirus.

What’s Next for the NHL?

On that note, there are more uncertainties. How will the NHL go about carrying on with hockey after this pandemic? There have been a few ideas floated around:

No matter what the league plans to do, NHL Deputy Commissioner Bill Daly has said that the NHL plans to carry out a full 82-game season for 2020-21.

Productivity Without Hockey And Sports During a Pandemic

As we’re all cooped up in our own homes, digital media has been a very popular past time. I’ve read more tweets about people recommending movies and TV shows to stream. I’ve been seeing more people sign up for and use TikTok. I’ve been seeing more social media challenges on Twitter. Brodie Brazil has his podcast on YouTube and has been FaceTiming members of the Sharks media, such as Curtis Brown and Randy Hahn, as well as certain Sharks players including Evander Kane and Logan Couture. He has more of those videos on the way and I highly recommend checking them out. Really cool stuff.

Last week, the NHL and NHLPA began pumping out videos of media Zoom conferences with certain NHLers from each division.

These are trying times to say the least. Below are the number of confirmed cases in the Bay Area by county as of writing this, per NBC Bay Area:

The number of confirmed cases in the state of California surpassed 4,000, marking the second day in a row that the state has passed a thousand cases marker. Just to make it clear, I am not here to fear monger or contribute to any fear mongering. However, if you’re not in the least bit worried about this virus, whether contracting it or spreading it to others, you really should be.

I want to thank everyone on the front lines working to fight against the coronavirus. All the doctors and nurses are doing a tremendous job of treating as many COVID-19 patients as they can. Everyone delivering ventilators, N95 masks, and other personal protective equipment to hospitals in need. All the scientists and researchers out there who are still hard at work trying to develop a vaccine for this virus. Everyone who’s trying their best to keep local businesses afloat. Everyone who has had a helping hand in these turbulent times. It’s not easy, but thank you for everything you do in helping keep us safe and keep us going.

Lastly, I hope everyone is hanging in there. I hope everyone is doing what they can to prevent the spread of the coronavirus, again, whether it’s washing your hands with soap and adhering to the 20 second rule, or disinfecting your mobile devices, your furniture, and other electronic devices. I hope everyone is also heeding the stay-at-home order as best they can. It’s not easy staying indoors all the time. I, for one, don’t stay indoors all the time. I still go out for my morning walks on the weekdays for about an hour, and practice social distancing. The rest of the time is spent at home unless I absolutely need to go out again.

Take this virus seriously. You look at what’s been happening in Italy, although it seems like the number of confirmed cases are slowing down, which is a good sign. But the U.S. is heading into the thick of it. So, again, I cannot stress this enough. Take this seriously. Don’t panic, but at the same time, be mindful of your health during these times. If you have mental health issues, hang in there. Talk to someone about them. I’m sure there are virtual resources out there somewhere where you can just talk to a mental health expert or a psychiatrist from home. That’s according to a health expert I saw speaking on a CNN Town Hall about the coronavirus pandemic.

If you or someone you know is sick or may be developing symptoms of COVID-19, go to the CDC website for information on what to do. Be safe, everyone.