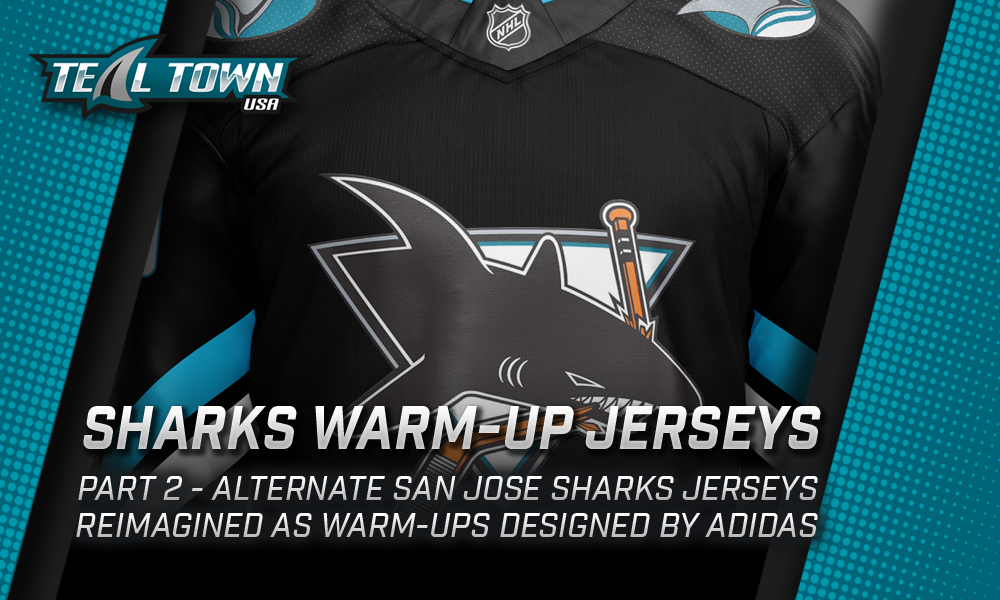 In part 1 of this series on Sharks warm-up jerseys, we focused on honoring the history of the San Jose Sharks franchise. In this 2nd installment, we spotlight the alternate, or “third”, jerseys for the Sharks.

Once again, the images below are not meant to be exact representations of past San Jose Sharks jerseys. Previous Sharks jerseys were simply used as starting point of reference and inspiration.

While the Sharks never played a game in anything close to these, Starter made a fashion series of hockey jerseys in the mid-90’s. While Starter put out a black jersey for every NHL team on sale, they didn’t look near as cool as this one. A lot of fans prefer that the Sharks alternate jersey is black. Another large segment of fans want to have the Sharks original jersey as their alternate. This mock-up asks the question “can’t we do both?”

This mock-up is based on the first black alternate jersey in Sharks history. Released in 2001, the original version brings back the “circle-fin” patches. However, we moved them more to the shoulder whereas the authentic version from the early aughts featured the patch more on the sleeve. We’ve also exaggerated the chevron striping on the sleeve for a more aggressive look. We added a waist stripe to match so it would closer match the 2nd generation of Sharks home and away jerseys.

Again, this Adidas reimagining doesn’t stray far from the original black armour jersey. However, we did update the drawstring installation at the neck since drawstrings look unnecessary with the Adidas design. This is also the only Sharks jersey to feature a full Sharks crest instead of the standard triangle logo.

This reboot is nearly no different from the original Reebok jersey, the first with a crew neck design. We considered using drawstrings to replace the rounded collar, but decided to keep it close to the original. However, we did added a waist stripe on the back and replaced the Stadium Series shoulder patch with the NorCal patch for balance.

Since being rumored about in January, there has been rampant reporting and speculation that all 31 NHL teams will be getting a specialized retro jersey for next season. While the current alternate “Stealth” design offers some cool detail, I’m much more in favor of the options above. Would Sharks fans mind going back to this look for the entire 2020-2021 season? Or beyond? Leave your take in the comments section below.

Check out part 3 of this series where we have some fun and ask “what if?”