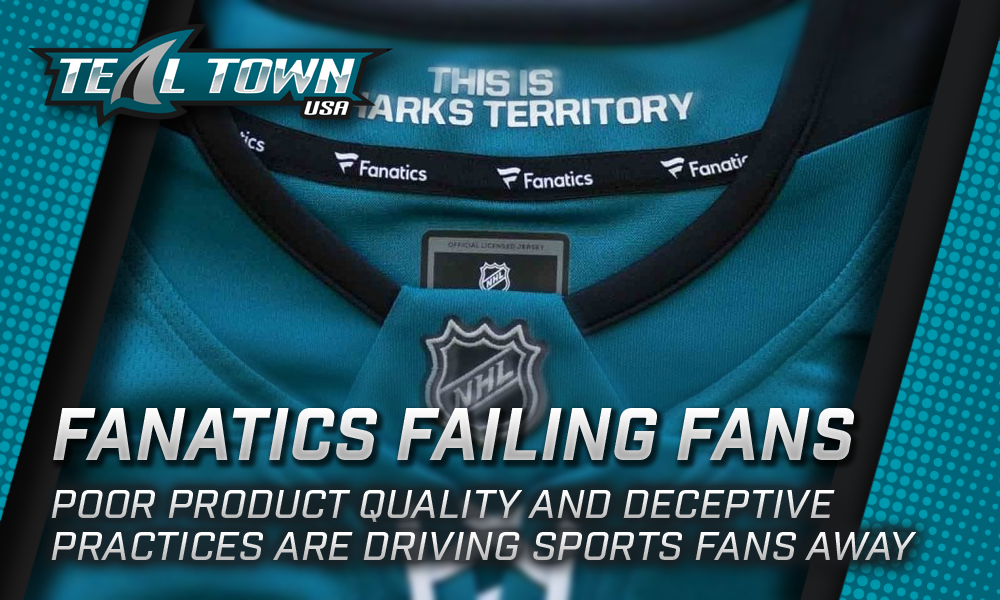 If our previous articles about Fanatics ruining the sports merchandising business or the fact that they maintain separate sites that sell fake or unlicensed sports swag wasn’t enough, here’s more reasons for fans to forget Fanatics, SportsMemorabilia, SteinerSports or any of the other sites Fanatics maintains when it comes to making sports collectible purchases. Also of note, SportsMemorabilia and SteinerSports sell unlicensed merchandise on eBay too.

*Take note that Fanatics, aside from running the merchandise sites for all the major sports, also owns fansedge.com, majesticathletic.com and lids.com. If you buy products from any of these sites, you’re supporting the Fanatics machine.

Who could ever forget the time when Fanatics.com screwed up and posted autographed Alexander Kerfoot jerseys for $19.99? Better yet, how about when random items on their web store were selling for literally billions of dollars? In the case of the Kerfoot jersey, Fanatics attempted to make it up to fans by giving them a 30% discount code. While that seems nice, Fanatics was having a sale at the time that was not only better than what the code offered, but also invalidated the code because Fanatics refuses to stack discounts. Maybe the better play is to honor the price? Either way, this is further proof Fanatics has no attention to detail.

Another way Fanatics rips off fans is by advertising a “sitewide” discount code.

You can see in the screenshot, NHLSHOP.com is offering a 25% OFF sitewide code. To the average person, sitewide means anything on THE ENTIRE SITE! However, when you look at the “promotion details”, you see this nugget of information.

Essentially, they are advertising a promotion they have no interest in honoring. This deceptive business practice is only in place to drive traffic to the site.

As you can see under the Coupon section at the bottom, it says “We are unable to apply a discount to your order because your items are excluded from this promotion.”  To test my theory, I selected 10 items at random on NHLSHOP.com to see how many would qualify for the 25% OFF sitewide promotion. Exactly ZERO items qualified. Try it out for yourself.

As stated earlier, Fanatics is behind NHLSHOP.com, Lids.com, and FansEdge.com. Another complaint about these sites I noticed on social media, and with The Hockey Guy, was inconsistent pricing. Let’s test that theory.

As you can see from the 4 screenshots, each site is running a different promotion with a different fan code. NHLSHOP.com and FansEdge are promoting free shipping while Fanatics and Lids both have 65% OFF promotions. However, these percentage discounts are nearly worthless as they aren’t applicable to a vast amount of the inventory available.

We see example after example of shirts falling apart and jerseys with patches peeling off. Yet, of all the incompetence shown from Fanatics, attention to detail has to be our favorite. We’ve seen Buffalo Bills hoodies with Detroit Pistons patches. We’ve seen a Baltimore Ravens jacket with “VIKINGS” printed on the sleeve. We’ve even seen team names spelled wrong, like the Denver Boncos. You have to wonder how many eyes these screw-ups are seen by and yet they still somehow end up with a shipping label slapped on them. But our all time favorite Fanatics jersey has to be this Brady Skjei jersey.

for my birthday my parents ordered a home canes brady skjei jersey and we got this…. nhl shop really been on some wacky stuff as of late @Fanatics pic.twitter.com/kcYd42MWvl

Can you you figure out all the mistakes in this hall-of-fame foul up? Count them off!

Don’t Just Take My Word For It! 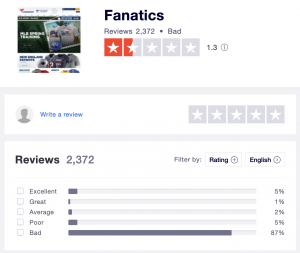 I’ve harped on this joke of a company for quite some time. God forbid as I customer, I expect a certain level of quality when Fanatics is charging over $40 for a t-shirt and over $90 for a quarter-zip. So don’t just take my word on the subject. Have a look at their reviews.

Currently on Trustpilot, there are over 2300 reviews of Fanatics. 5% have rated the company as “POOR” while a staggering 87% have rated Fanatics as “BAD. That’s a combined 92% negative response.

If those numbers were inverted and it was 92% favorable, I would consider that maybe it’s just me with the problem for this abhorrent company.

Over on SiteJabber, the reviews are just as bad while Fanatics has a rating of 1.64 stars from 1,960 reviews. Most of the stories are the same. Customers are complaining about letters peeling off, graphics fading after a single wash, deceptive shipping and return policies, and a general rudeness of their customer service. Similar stories can be found on their Better Business Bureau profile.

I was able to reach a former Fanatics employee and what she had to say was illuminating, yet not surprising.

“Fanatics employees don’t even know sports. They don’t know the difference between one logo and another. There is zero quality control. A corporate VP overseeing our transition to Fanatics had us throw away all dated merch instead of selling it at discount or donating it. One time, I watched a district manager argue with a fan over what year his jersey was from. The manager was wrong and didn’t have clue what he was talking about.”

It’s obviously your prerogative to decide whether to support this shoddy and deceptive machine. But I have to ask why would you support a brand that cares about nothing except a profit at all costs. The only way customers can bring about change is to vote with their dollar. I’ve never spent a penny on anything with a Fanatics logo. That logo is kryptonite to my wallet.

It’s clear that Fanatics bought properties like Lids.com and Majestic Athletic for the reputation of their quality. Rather than building off that reputation, Fanatics is ruining it by selling cheap versions instead. A quick look at social media will show you fans have grown increasingly tired of Fanatics. I think Yugo might have had a better reputation for quality.

For those that will continue to support a monopolistic Fanatics company, I’m genuinely curious. Tell me why you would buy anything with a Fanatics logo on it in the comments below.

Where Should I Buy My Gear?

Many people have responded in agreement to my anti-Fanatics articles and my assertion that Fanatics does, indeed, suck. However, some responded to ask “where should I get my gear from if not Fanatics?” That’s a solid question so here’s a list of non-Fanatics places to find non-Fanatics merch. However, some of these sites unfortunately do include some Fanatics product so make sure to read those product descriptions diligently.

Enjoy our take on what a Fanatics commercial would look like if they were truthful.