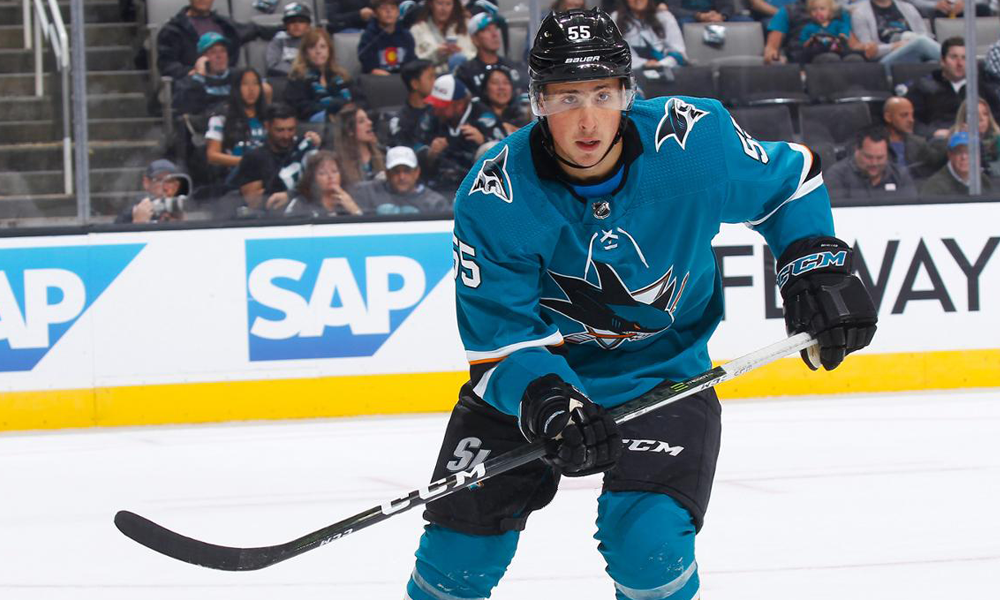 With the Sharks rookie camp having been completed and pre-season underway, it’s a great time to take a look at this year’s crop of prospects. There has been a lot of movement from the previous year’s rankings as some players have seen their value shoot up, while others have dropped as a result of either a lower projected ceiling or simply by regression in performance. John Leonard (ranked 2nd last year) has graduated with full time NHL duties during the 2020-21 season and Ivan Chekhovich (ranked 12th last year) has left the franchise for a return to Russia

As the NHL club has struggled and claimed to be in a “reset” phase over the past couple seasons they’ve been able to stock up on some picks and bolster the depth of prospects in the pipeline. The Sharks also drafted in the top 10 for only the second time since 2007. This has resulted in a much improved prospect pool which would likely rank in the top half of the league, if not top 10.  Overall, I’m very excited about this group and expect 3-4 players to get NHL minutes as early as the coming 2021-22 season. Others may need a few years but could pay huge dividends if the franchise shows patience with their development.

As a reminder, this list prioritizes potential ceiling of a player while also factoring the realistic chances of the player achieving that ceiling. There are likely some “prospects” within the organization that could play in the NHL tomorrow but ultimately will not have NHL careers. Those players will not be found in these rankings.

Part 1 will start off with prospects ranked 11 through 15 and I’ve included an honorable mentions list this year due to the depth of prospects in the system.

We kick-off our rankings with a big center, Jasper Weatherby. A year ago, a strong majority of Sharks fans were likely questioning whether Weatherby would get an entry level deal with the Sharks but after a productive junior season with North Dakota of the NCAA Weatherby was offered a contract and looks primed to compete for the much talked about 4th line center role. Jasper improved his offensive numbers during the 2020-21 season to 14 goals and 24 points in 29 games helping the Fighting Hawks to a conference title and an NCAA tournament bid. I wouldn’t expect too much of Jasper’s offense to translate at the pro level but he did standout in the Sharks prospect camp over the summer as well as the recently completed rookie tournament hosted by Arizona. Weatherby is most likely to develop as a big center capable of providing the Sharks reliable depth minutes and some offense in the tough areas while also being a good locker room guy. He has a strong chance to make the Sharks lineup straight out of camp, but it wouldn’t be surprising to see Weatherby spend some of the coming season with the Barracuda. All in all Weatherby has been a pleasant surprise for the franchise and looks to have a future in the NHL.

Jasper Weatherby gets the puck right to him and it's #SJSharks 2, #VegasBorn 0 pic.twitter.com/2AKksdwzHc

Benjamin Gaudreau is the first and only goalie to make this years Sharks top 15 prospects. There is an element of unknown quantity to Ben Gaudreau, but what we have seen so far has been impressive. Gaudreau was set to play last season with Sarnia of the OHL but the OHL season never started due to the covid-19 pandemic. Desperately in need of goaltending depth the Sharks decided to use the 81st overall pick on Benjamin Gaudreau, the highest the Sharks have taken a goalie since using the 55th overall selection on Terry Friesen in 1996. The Sharks put a lot of faith in previous scouting as well as the under 18 tournament which saw Benjamin Gaudreau carry Canada to a gold medal. Gaudreau boasts very quick reflexes, solid positioning and above average puck tracking all of which were on display in the recent prospect scrimmage and rookie tournaments. It’s tough to tell what the Sharks have in Gaudreau but a strong 2021-22 season as Sarnia’s starting goalie could see him shoot up this list. He could also compete for a spot on Canada’s WJC team. Gaudreau is likely the best goalie prospect the Sharks have had in over a decade.

Benjamin Gaudreau makes a clutch save to keep Canada up by one. #U18Worlds pic.twitter.com/nNvYIuQ6gn

Our 13th ranked prospect is the big forward Brandon Coe. Another victim of the OHL season being cancelled, Coe played professional hockey with the Barracuda during the 2020-21 season. While Brandon didn’t produce much in the form of offense he did play well considering it was his draft+1 season, where a player with his background would typically still be playing in Juniors. Coe is a solid puck-handler and is a strong skater for his size. Where he plays this coming season is still to be determined. Covid-19 has thrown a curve ball into the standard development of many young players. It could be helpful for Brandon to return to North Bay of the OHL where being a top player at the junior levels might boost his offensive game and confidence. On the other hand, Coe could remain with the Cuda in the AHL where by the end of last season he started to get more meaningful minutes and he would be closer to the professional club. Brandon flashes middle 6 upside. He isn’t dynamic enough to be a top line forward and ultimately 2nd line might be a stretch as well but the talent is there. We should get a better idea of what the Sharks have in Coe during the upcoming season.

Next up is Sasha Chmelevski and he is the first player to see a significant drop in the rankings from last year. A large reason for that drop is due to players improving and additions to the Sharks prospect pool but a portion of it is due to Sasha aging and not really proving he belongs in the NHL to this point. Chmelevski is still only 22, but his ceiling is starting to look a bit more like a bottom six depth forward as opposed to a couple of years ago where there was some speculation about him fitting into the top 6. His AHL production did improve last season to 9 goals and 20 points in 27 games, especially during the final 13 games where he scored 7 goals and 16 points. Sasha also saw his first NHL action registering 2 assists in 5 games. He had some moments in those NHL games but for the most part didn’t receive a ton of minutes. Sasha has solid offensive instincts and a responsible enough defensive game to be relied on to play depth minutes. If he continues to develop, offensive production at the NHL level is realistic, but the 2021-22 season will be important. As the franchise gets more forward depth within the system, there will be less opportunities for Sasha to earn a spot with the Sharks, and it could lead to the Sharks moving him. Simply playing well in the AHL might not be enough anymore. On the brightside, Chmelevski has looked good during camp and pre-season to this point.

If you're wondering how Sasha Chmelevski has nine points (4g 5a) in 4 games with the #sjbarracuda pic.twitter.com/zUrrCV0PNj

Rounding out our first group of prospects is Adam Raska. Get comfortable with this name because I am certain he will be skating with the Sharks in the near future. Raska’s game has “NHL” written all over it which was on display this summer, during the rookie tournament and through the first few games of pre-season. He will likely not be a high scoring player at the next level, but he plays a style that is highly coveted and translates well to the pro game. Adam is very physical often playing on the line of “dirty” which will need to be cleaned up a bit. During the past WJC tournament he was suspended one game for boarding. Raska’s game is valuable though, as he has a knack for agitating opposing players. Mix this with his tendency to always be in the right place, sneaky good hands along with some finishing abilities and the Sharks will likely have a solid 3rd line player in Raska. Think along the lines of the great Esa Tikkanen more so than a Tom Wilson type. Tom Wilson, despite how much he’s hated, actually is an offensively gifted player. I’m not sure Raska has that ceiling but developing into a 10-15 goal scorer at the NHL level while providing a hard brand of hockey is realistic. Raska also has a great motor, similar to Sharks fan favorite Mario Ferraro. He looks like another late round steal for the Sharks.

Check back tomorrow for Part 2 with Sharks prospects ranked 6 through 10!