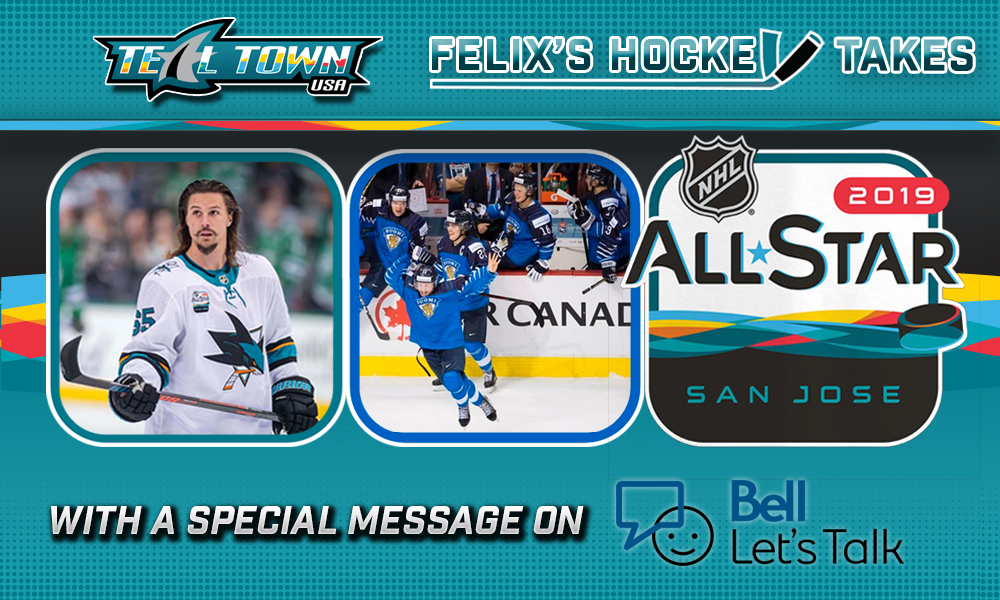 I’m going to talk about Erik Karlsson‘s historic point streak and where the San Jose Sharks stand more than halfway through the 2018-19 season. I’ll also talk World Juniors and the 2019 NHL All Star Weekend that’s happening towards the end of this month, as well as a little bonus about #BellLetsTalk.

After serving a two-game suspension for an illegal check to the head on Los Angeles forward Austin Wagner, Erik Karlsson has been putting up the points for the Sharks at a historic pace. In fact, on Tuesday against the Oilers according to the NHL PR Twitter account, the Swedish defenseman became the 13th defenseman in NHL history, and sixth since 1990-91, to record at least a point in 14 or more consecutive appearances within a season. Needless to say, the 28-year-old Landsbro native has been on a tear of late. In addition, the Sharks have been winning games, especially against Tampa Bay and Las Vegas which saw their winning streaks snapped at the hands (or jaws) of the boys in teal.

As of now, this is what the Western Conference standings look like, courtesy of NHL.com.

The World Juniors have come and gone again, with Finland taking home the gold this year. Team USA came away with the silver, and Russia with the bronze. For the first time in a very long time, Canada did not enter the medal round as the host nation as they fell to the eventual gold medalists. Notable prospects in the tournament included Jack Hughes (USA) — the projected no. 1 draft pick in 2019, Anaheim Ducks prospect Max Comtois (CAN; Sharks fans may remember him as the one who opened the scoring this season on Opening Night), Philadelphia Flyers prospect Morgan Frost (CAN), and Vancouver prospect Michael DiPietro (CAN). Chicago’s prospect Henri Jokiharju represented Finland and Golden Knights prospect Erik Brannstrom represented Sweden.

On an ugly note, Denmark was held off the scoreboard throughout the tournament until the relegation round against Kazakhstan. The Danes began the World Juniors with an embarrassing blowout loss against Canada, with 14 unanswered goals against. That goals-against average for the Danish netminders would rise higher, and higher, as they continued to get shutout 4-0 by Russia, 4-0 again by Switzerland, and 4-0 by the Czechs, before finally breaking through with three goals against Kazakhstan, albeit still a loss. The Danes would get shutout once more in the tourney by Kazakhstan, losing 4-0 in the final relegation game. Thus in total, Denmark only managed to score three goals throughout the World Juniors, not counting pre-tourney match-ups. As a result, Germany will be promoted from Division I into the World Juniors in 2020 as Denmark will be relegated back into Division I.

The stage is set for the 2020 #WorldJuniors 👀 pic.twitter.com/pi5puhf5Wd

Now, the World Juniors is a serious competition. Obviously, every player and country has worked their butts off to get where they are, and they want to medal. Each and every team wants a chance to medal. However, these guys are also supposed to have fun. Why do I mention that? Well, I ranted about this a day or two after it happened, but an incident occurred on social media where Team Canada’s captain Max Comtois was heckled very badly for missing on a penalty shot against Finland. That’s the game that Canada had to win to advance to the gold medal round. A group of Canada “fans” called him names and said a bunch of bad things and it got to the point where he had to close off the comments section on his Instagram. Additionally, his representatives had to issue a statement condemning this behavior. Now, I’m going to talk more about similar issues like this later on, but what those people did was totally uncalled for. Teal Town USA’s very own Puckguy tweeted about it himself.

It’s sad that there are those who feel the need to rip on a 19-year old kid because he missed on a penalty shot in a tournament. What if that’s your kid in the future? What if that was you? I’m sure he feels awful already. Have we forgot why we do #BellLetsTalk ?

Yeah I was mad that Max Comtois beat Jones for his first NHL goal. But shoot, do we really need to give ill will to a kid because he missed a penalty shot or his team lost? No we don’t. It’s a game, and yes while it means much more than that to some…

It doesn’t mean it’s ok to go on social media to make horrific comments because the puck went a different way than many were hoping.

Sports are supposed to be fun. A welcome distraction from the crap of everyday life.

To quote Tomas Hertl, FUN MUST BE ALWAYS!#EndTheStigma

(Upon further investigation, Max Comtois’ Twitter seems to have been deactivated, which is totally understandable considering the circumstances.) It was eventually revealed that Comtois played with a separated shoulder.

Can you believe it? The NHL All-Star Weekend is only one week away! The NHL All-Star Fan Voting just ended, with Joe Pavelski, Brent Burns, and Erik Karlsson all representing team teal in San Jose. Logan Couture was included in the Last Man In ballot. However, despite the best efforts of Sharks Territory, they were no match for the countless Edmonton fans who successfully voted in Leon Draisaitl for the Pacific Division. Here’s the rest of the All-Star rosters.

Nevertheless, it should be a fun one. Personally, this will be the first time I get to experience the NHL All-Star Weekend firsthand. I will be at the NHL Fan Fair at the San Jose McEnery Convention Center on Saturday, so if you’ll be there too, holler at me! Teal Town USA will have full coverage on the All-Star events, and why not, as it will be the first time that the Bay Area has been chosen to host the events since 1997.

Originally, I was going to end this article with the All-Star Weekend. However, as I was typing the stuff that happened to Max Comtois and embedding Kuhre’s tweets, I felt it was best to instead end this on Bell Let’s Talk (also due to the fact that I likely won’t be having another FHT for another few weeks). Bell Let’s Talk Day, as you may or may not be aware, is in two weeks. It takes place on January 30th this year, and once again it’s another chance for those mental health and suicide prevention tweets to get flowing like never before. In case you don’t already know what it is, it’s an annual movement every year where every share, every tweet, text, and every Facebook post about #BellLetsTalk donates 5 cents to mental health initiatives in Canada. Started by Bell, a Canadian telecommunications company, the movement has sparked a plethora of tweets and conversations about mental health and mental illness throughout North America.

However, this conversation should extend beyond just one day. Not to get too personal, but as you all know, I’m a huge mental health advocate. I suffer from anxiety. I don’t have depression, but at times I do feel a little depressed. I don’t work well under stress, or under pressure, but I’m willing to do whatever it takes to get through it. The last thing I want is to see people suffer and go through worse thoughts than I have on a constant basis and think the only way to end the suffering is to take their own life. Here’s my tweet I’ve had pinned for a while now.

If you’re struggling with your mental health, shoot me a DM. I’ll at least lend an ear, if not be able to help you with what you’re going through.

I highly encourage others to do the same. Enough is enough. #nomoresuicide https://t.co/K1m9rkcSVg

Also, as you can see, I have a link posted in that tweet about an article pertaining to this topic on my own personal blog (#shameless plug). This is important stuff. There are so many people out there going through something we don’t know about. Some of them have it worse than others. Bottom line is I want people to know that they’re not alone. My DMs are always open. I’m willing to talk to anyone about their mental health issues and make sure they get better and healthier in that aspect. I’m sure Erik, AJ, and others are as open about it, Chris included as he has also dealt with these issues. Us folks here at Teal Town USA don’t judge. We’re all about accepting people across the hockey community. We understand how serious mental health issues are, and we tolerate no bashing of any kind towards anyone especially towards their mental health. I’ve plugged this like heck, but if you haven’t already, check out Jennifer Moglia‘s article on mental health in hockey on Puck It Up. She is a friend of mine, and also writes editorials as well on FanSided’s Blue Line Station. You can check out her latest article there.

Again, you are never alone. Hit us up in our DMs if you ever feel like you need to talk about your mental health concerns, or if you feel suicidal, any of that. If you need to call the National Suicide Hotline, the number is 1-800-273-8255. As I’ve said, this should extend well beyond Bell Let’s Talk, and the incident with Max Comtois is Exhibit A of that.

Enjoy the All-Star festivities, and be safe, y’all!