Couture Out, Season Over? 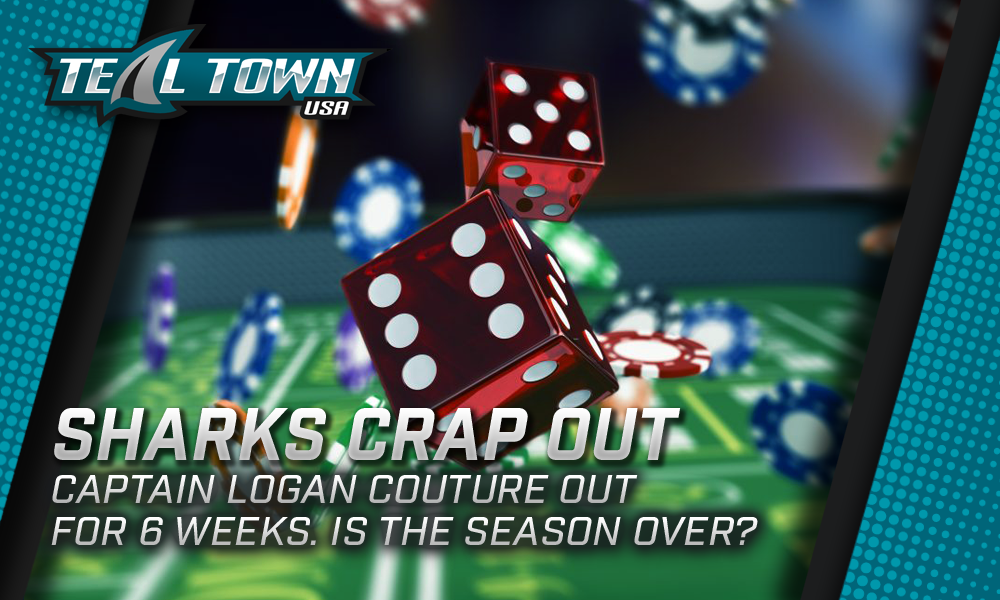 Lady luck can be a cruel mistress. With 45 games played, the San Jose Sharks are 8 points from a wildcard spot and 9 points from a divisional spot. Team teal has the worst goal differential in the conference. In order to get back into a playoff spot, the Sharks would essentially need to win 2 of every 3 games they play for the remainder of the season. And today, it was announced that captain Logan Couture will likely miss at least 6 weeks after going awkwardly into the boards during the January 7th game against St Louis. When an already struggling team loses their leading point scorer, all bets are off. Season over.

#SJSharks GM Doug Wilson announced today that Sharks forward Logan Couture suffered a small fracture in his left ankle in Tuesday's game at St. Louis. He is expected to miss approximately six weeks but will be continually reevaluated during that time.

How did we get here? During last summer, general manager Doug Wilson gambled. Wilson wagered Timo Meier, Kevin Labanc, Marcus Sorensen, and Evander Kane would all improve on performances from last season. Aside from Kane, those players are well off last season’s pace.

Wilson staked that prospects such as Sasha Chmelesvki, Joachim Blichfeld, Ivan Chekhovich, Danil Yurtaykin, and Mario Ferraro would be ready to make an impact at the NHL level. Aside from Ferraro, none of those players are close. There were expectations that Dylan Gambrell and Antti Suomela would make positive strides. Suomela has played only 7 games this season while Gambrell is currently with the San Jose Barracuda.

If signing Patrick Marleau wasn’t an early indicator that the Sharks front office misevaluated the youth, picking up Stefan Noesen off waivers was surely a red flag.

This season, the Sharks have also seen Jonny Brodzinski, Lean Bergman, Noah Gregor, Joel Kellman, and Lukas Radil get looks. Only Gregor and Kellman have stuck around for more than a handful of games. You have better luck picking winning lottery numbers than predicting the bottom 6 for the Sharks on any given night. Instead of forward depth, Wilson took a chance and put all his chips in on a defense that is currently 28th in high danger chances allowed. None of Wilson’s bets are paying off.

Look, I get it. Erik Karlsson has a ton of fans. And that’s great, but I’m not one of them. Yes, the guy has some amazing ability to find guys up the ice. He also has an incredible propensity for finding himself in front of his own goalie when the puck is sitting in the back of the net. EK65 puts up points without a doubt, but he’s also a turnover machine. Bret Hedican even said as much during the game versus St Louis.

Brent Burns is another high-risk, high-reward player. We’ve all seen his starfish defensive posture play. Like Karlsson, Burns has fantastic offensive upside while frequently turning the puck over. The point is, no team needs two of these players. If Wilson either hadn’t signed EK65 or had been able to move out Brent Burns, the Sharks would’ve had the cash to add offensive skill. Whether San Jose worked out deals for any or all of Joe Pavelski, Gustav Nyquist, or Joonas Donskoi, or looked for other offensive weapons to replace them, DW would at least have the money for forward depth if either Burns or Karlsson aren’t in San Jose.

No other team in the NHL has devoted more money to their top two defenseman than San Jose. In fact, Karlsson’s $11.5 million per season is more than most team’s top two defenders, combined. The best team currently in the league, the Washington Capitals, have only $13 million tied up in their top 2 D-men. The best team in the Western Conference and current Stanley Cup champs, the St Louis Blues, have $12 million invested in their top 2 defensemen. Aside from the Sharks, no other team in the league is paying 3 guys on the blueline a combined $26.5 million per season for the next 6 years. Not even close.

Last season, Pavelski, Nyquist, and Donskoi combined for 58 goals and 54 assists. Those 3 players would be the 2nd line on most NHL teams. Rather than keeping those 3 players or replacing them with similar forwards, Wilson put his money on the blueline. Did Wilson think the NHL’s most expensive defense would make up those lost 112 points from last season?

Some will point to Martin Jones and Aaron Dell for the Sharks woes this season. While neither have posted respectable numbers for longer than a couple games this season, their numbers are very close to what they posted last year. And last year, the Sharks made it to the Western Conference Finals with the same tandem.

Currently, Nyquist and Donskoi are having solid seasons while Pavelski is off his normal pace. Then again, Pavs doesn’t have those Burns’ slappers to tip in Dallas. The point is San Jose had the 2nd highest scoring team in the league last season. Today, they’re 27th while leading the NHL in scoring chances against. And Doug Wilson has nothing of real value to offer to replenish his chip stack. In the past, most of Doug’s bets have paid off, but this long-shot wager isn’t looking good in the short term.