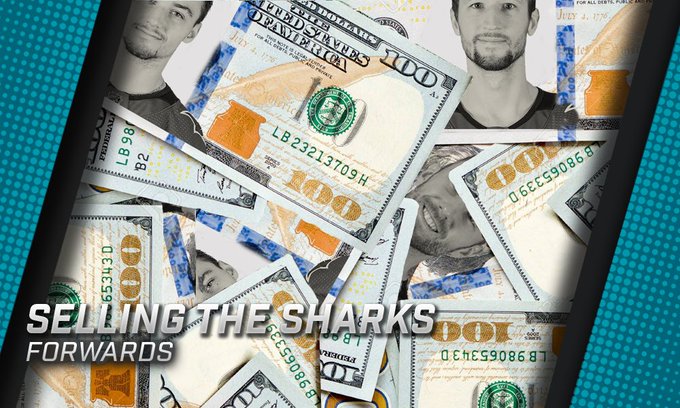 The season continues and the playoffs continue to look out of reach for the San Jose Sharks. So too does our series looking at the roster from the perspective of being sellers at the trade deadline. We now turn our attention to some of the forwards on the roster. We continue to look at how movable they are and if, in reality, they should be moved. All salary cap and trade clause information is courtesy of CapFriendly.

Initially reported by Pierre Lebrun, and confirmed by the Sharks, Couture is week-to-week with a fractured ankle. While moving Couture was likely never in the cards, it’s impossible for the Sharks to do at this point. If healthy, it’s hard to imagine Doug Wilson pulling the trigger on a move that would see him trade the team captain. The only way Couture is leaving town is if he himself requests a trade. If the Sharks were to shop the center, they would likely get a decent return for one of the better two-way centers in the league provided it was from one of the three teams he would choose to go to.

Barclay Goodrow has been one of the few bright spots on the team this year. He has served admirably even if miscast as a top-six forward this season. With a year remaining on his deal at less than a million dollars, you could do a lot worse for a depth forward. I’d argue that Goodrow’s value has never been higher. The problem is it’s hard to get value out of a depth forward. A likely return for Goodrow would be either another depth player, a mid-round pick, or a C level prospect. The Sharks are probably better off keeping Goodrow unless he is used as a part of a bigger deal.

There are some players that should be basically untouchable by their franchise. For the Sharks, Hertl is one of those players. If the Czech center was made available, the Sharks would have no shortage of suiters. Since he is too young for trade protection, you could move him to the highest bidder. The return for Hertl would be high, in both players and picks. Unless you get a foundational piece in return though, the Sharks would have a nearly impossible hole to fill.

If this hypothetical deal is heavy in prospects or picks, the Sharks would need to be careful. The prospects would need to be nearly NHL ready. In the case of draft picks, they’d still have to make the right pick in the draft to get a return on investment. The draft is not a scenario that should bring much confidence to fans. So while you certainly could move Hertl, it would likely be a franchise-altering mistake.

When it comes to players signed to long-term, big-money contracts, Evander Kane may have the best one. Unlike many of the Sharks’ other long-term deals, Kane’s will expire when he is 33. This is a rare case where Doug Wilson has correctly used this type of contract. It covers the prime of his career. Kane is also in the middle of the pack for production among peers who earn a similar amount of money this season.

This is another player who the Sharks could likely move for a significant return. It should be noted that some teams may be leary of the reputation that Kane brings with him and this could play a factor in a potential return. He likely won’t get the benefit of the doubt from the Department of Player Safety. Kane also does have a history of both on and off ice issues. It should be noted though that while with the Sharks there has been no reports of hockey-related issues between him and his teammates. Ultimately, it makes little sense to move one of the team’s best contracts.

For most teams, Melker Karlsson is a fourth-line player with some utility. Even though he is somewhat overpaid at 2 million dollars and pending UFA, he will likely get some interest as the deadline approaches. The Sharks, in my opinion, have players who could replace Karlsson in the lineup. However, both the front office and the coaching staff seem to have a level of comfort with Karlsson over other players.

The Sharks could likely get a modest return for a player of Melker’s skill set, potentially as high as a third-round pick. If the Sharks decide that the season is all but over, they should absolutely try to get something for Karlsson. The Sharks have players that can replace Karlsson’s minutes for a fraction of the cost.

This past off-season Kevin Labanc made a bet on himself, taking a one-year, one million dollar contract. The reason for this was simple. The Sharks were cash strapped after signing the Erik Karlsson extension. With the cap likely to rise as it always has in the cap era, the Sharks would have more money to pay for the following season. Worst case scenario, if he followed up his 56 point campaign in 2018-19 positively, he could always take the Sharks to salary arbitration.

Like many other things this season, this gamble has so far failed to pay off. After 45 games he has only 9 goals and 12 assists for 21 points and is on pace for 38 points. This would be his lowest point total playing a full season. Even on a team that has struggled with offensive depth, Labanc has mostly found himself on the third line.

The Sharks may not get a significant return for Labanc on his own, although a second-round pick is not out of the question. Doug Wilson could include Labanc as a part of a bigger deal to increase the return for the Sharks. For example, including him in a deal with Brenden Dillon may possibly net you a better combination of draft picks or even a B level prospect. I’m not sure if the Sharks are going to move on from Kevin Labanc, but they should at least listen.

Couture Out, Season Over?
Selling the Sharks: Forwards Continued