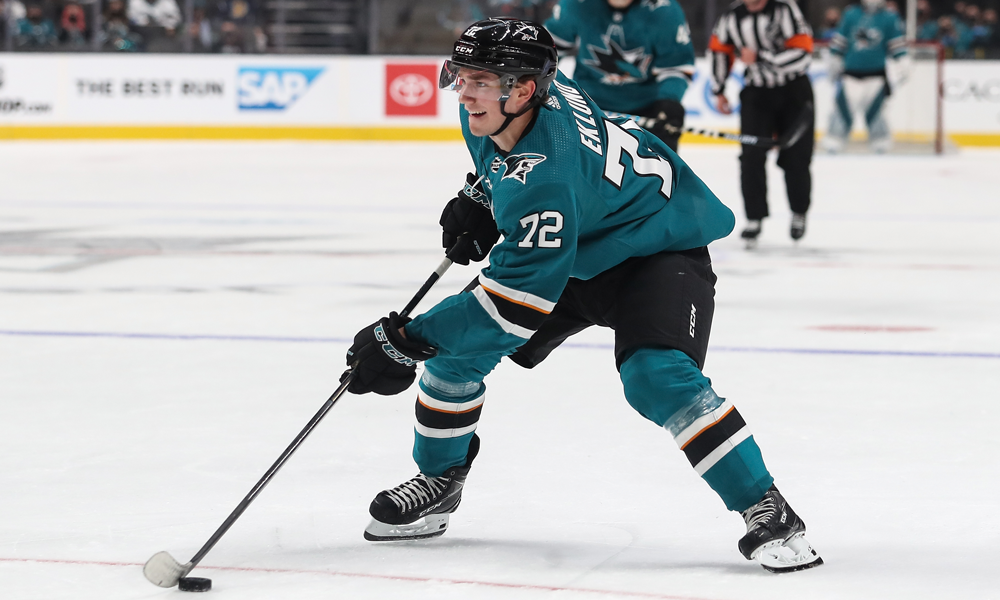 Part three of the Sharks top prospects rankings features a top 5 that Sharks fans can finally be proud of. There is elite level talent in this group and the Sharks have a prospect that is likely in the top 10 across the entire NHL which the franchise hasn’t had in some time. All of these players were top 2 round picks straying from the late round gems the Sharks have a knack for finding.

Ryan Merkley was the top prospect in my rankings last year but it was time to have others pass him. Last season Merkley saw his first extensive sample of professional level hockey with the Barracuda and it wasn’t very good. He registered a goal and 11 points in 31 games while showing a lot of the same issues that plagued him in junior hockey. Merkley continues to lack consistency, make awful mistakes defensively and show a lack of awareness. Offensively Merkley has elite level vision and playmaking abilities, no one really doubts this part of his game. He can take over a game and create relentless opportunities and he could be a weapon on the power play. The question remains as it has for the past few years, can Merkley develop into an even an average defender? For him to have an NHL future coaches will need to trust him. At the moment I’m not sure Merkley can be trusted defensively even in sheltered minutes. If you’re looking at Merkley with a glass half full mentality then you likely point out his offensive game is NHL ready which in all fairness has been on full display during recent action in the prospect scrimmage, rookie tournament and pre-season. If his defensive game improves, he is a top talent and will be in the NHL. If not, I think he will frustrate coaches and ultimately get moved. His ceiling at this point is likely that of a offensive minded d-man who gets PP1 or PP2 minutes while getting protected either with a stay at home defender or simply playing sheltered minutes.

Artemi Kniazev comes in as the Sharks top defenseman prospect and has had the opposite trajectory of Merkley. Kniazev has done nothing but impress since being drafted in 2019. Last season he only played 14 games for Chicoutimi of the QMJHL but registered 5 goals and 18 points. Artemi also featured on the blueline for the Russian WJC squad and was among the better defenseman in the tournament. More recently during the summer prospect showcase Kniazev was the most noticeable player throughout the game creating offense and making smart plays defensively. He may not possess the offensive ceiling of Ryan Merkley but he is very talented in his own right. Artemi has elite vision, often making great passes and using his above average skating to maneuver throughout the offensive zone. Kniazev is also reliable in the defensive zone, utilizing good positioning, a good stick and being able to consistently carry the puck out of trouble. All around Artemi Kniazev looks like a safe bet to be an NHL player and could be a high level 2nd pairing d-man. His offensive game is strong enough to get power play minutes and defensively he could even see PK minutes. Fans will likely have to wait another year to see him in the NHL with the expectation he will play with the Barracuda this coming season, but it’s very easy to see his abilities translating to NHL success.

Ozzy Wiesblatt comes in as the Sharks 3rd ranked prospect. Ozzy is a speedy forward with above average puck skills and a high motor. He will always been seen skating hard, going to the puck and creating chances. Wiesblatt also has a strong two way game that could translate to being an all situations player for the Sharks. Last season Ozzy suited up for 23 games with Prince Albert of the WHL, posting a respectable 7 goals and 28 points. He also saw some AHL action with the Barracuda, scoring a couple of goals and an assist in 6 games played. Ozzy has looked very good in recent action standing out in the prospect scrimmage and looking good during the rookie tournament. He likely will be returned to Prince Albert for a final season of junior hockey before making the jump to pro hockey permanently. Ozzy could also be a candidate for the Canadian WJC team as he will still be 19 years old at the time of the tournament. Sharks fans can realistically expect to see Ozzy with the Barracuda at the end of the season and he could even get a few NHL games if there are injuries. Ozzy may not have top line offensive abilities but he is the type of player who has enough skill to compliment top players. He likely will fit better in the middle 6 while contributing offensively and seeing time on both the PP and PK. Due to his relentless energy mixed with a fun style of hockey, Ozzy could be a future fan favorite.

Ozzy Wiesblatt picks his spot and scores on the 5-on-3 power play, assisted by Jayden Halbgewachs and Maxim Letunov#sjbarracuda pic.twitter.com/xKaR29HWkL

The Sharks number 2 prospect and prized pick of the strong 2020 draft class is Thomas Bordeleau. Thomas completed his freshman season leading the powerhouse Michigan squad in scoring. Playing 24 games, he registered 8 goals and 30 points and was award freshman of the year honors by the NCAA. His year could have been better too if not for some unfortunate Covid related events. Bordeleau was basically a guarantee for the USA WJC team that went on to win gold but his roommate had a false positive covid test right before the tournament forcing USA hockey to cut Bordeleau from the lineup by the mandated deadline. Later in the year Michigan was forced to drop out of the NCAA tournament after also having players test positive for covid. Missing out on those two big tournaments definitely hurts but Thomas is returning to Michigan for a sophomore season where he will be playing with one of the best college lineups in recent history. Bordeleau should also be a strong candidate to join the USA WJC team in his final year of eligibility. This will likely be his final season at Michigan as it is reasonable to expect him to sign a pro contract at season’s end. Sharks fans can expect Bordeleau to be a highly skilled playmaking forward who will likely feature on the top PP unit. Bordeleau is elusive with the puck, can beat defenders 1-on-1 and use his patience with the puck to find linemates with a tape to tape pass. He has first line upside, but doesn’t quite fit the mold of a first line center. Bordeleau is more likely to be a high end 2nd line center.

The Sharks franchise has its first elite level prospect in a long time. The hype around William Eklund is real and totally warranted. This kid is super talented, and is the type of player you can build a team around. His puck skills are elite, he skates very well, has patience with the puck and high level hockey IQ. On top of that he backchecks and plays smart hockey defensively. The fact that he dropped to 7th overall in the recent draft still baffles me. I wrote about him more in our draft preview this past summer and still believe he should have gone in the 2nd overall spot. Last season playing in Sweden with Djurgardens, Eklund scored 11 goals and 23 points in 40 games. This is amazing production from a draft eligible player and even outperformed other high level prospects drafted a year earlier. The player I equate his game to is Matthew Barzal, who many Sharks fans wanted the franchise to draft instead of Timo Meier back in 2015. Barzal is often skating circles around defenders, dangling in and out of traffic attracting defenders and then finding the open man for a goal. Eklund has all of these abilities and he has already looked like one of the Sharks better players this pre-season, including the experienced NHLers. With added confidence and experience Eklund could be the focal point of a top line and the power play. Whether he makes the Sharks lineup this season is still to be determined. I used to be of the opinion that he should go back to Sweden to continue developing but if you’ve watched him this pre-season you can see that he’s going to make that decision very difficult for Sharks management. If he can make the team and produce in a top 6 role you have to give him that opportunity. Fans should be super excited to have Eklund, he’s a top 10 prospect across the entire NHL.

I really like this clip of William Eklund (forward, #72 white).

He's the focal point of DIF's PP2. Makes the entry. Excellent deception down low, then scores from the near post (which is not a spot that talented teens typically play in pro leagues). pic.twitter.com/1mLdzj1swd

The Sharks prospect pool is looking very strong and they have depth in all positions. Gaudreau and Melnichuk provide the franchise with potential NHL goalies for the future. On defense Hatakka and Kniazev are going be NHLers and Merkley is looking like he could be as well. Up front there is a lot of talent with Eklund, Wiesblatt, Robins, Gushchin, and Bordeleau all capable of being top 6 forwards. Weatherby and Raska will provide the Sharks depth and toughness at the forward position. The future is bright and with super strong drafts coming up in the next couple of years, fans shouldn’t be too upset if the Sharks struggle. If the franchise does add another top pick (keep and eye on Wright, Lambert, Savoie, Bedard, Dvorsky and Michkov) via the lottery they will be well on their way to having a foundation that could compete for a cup in the near future.