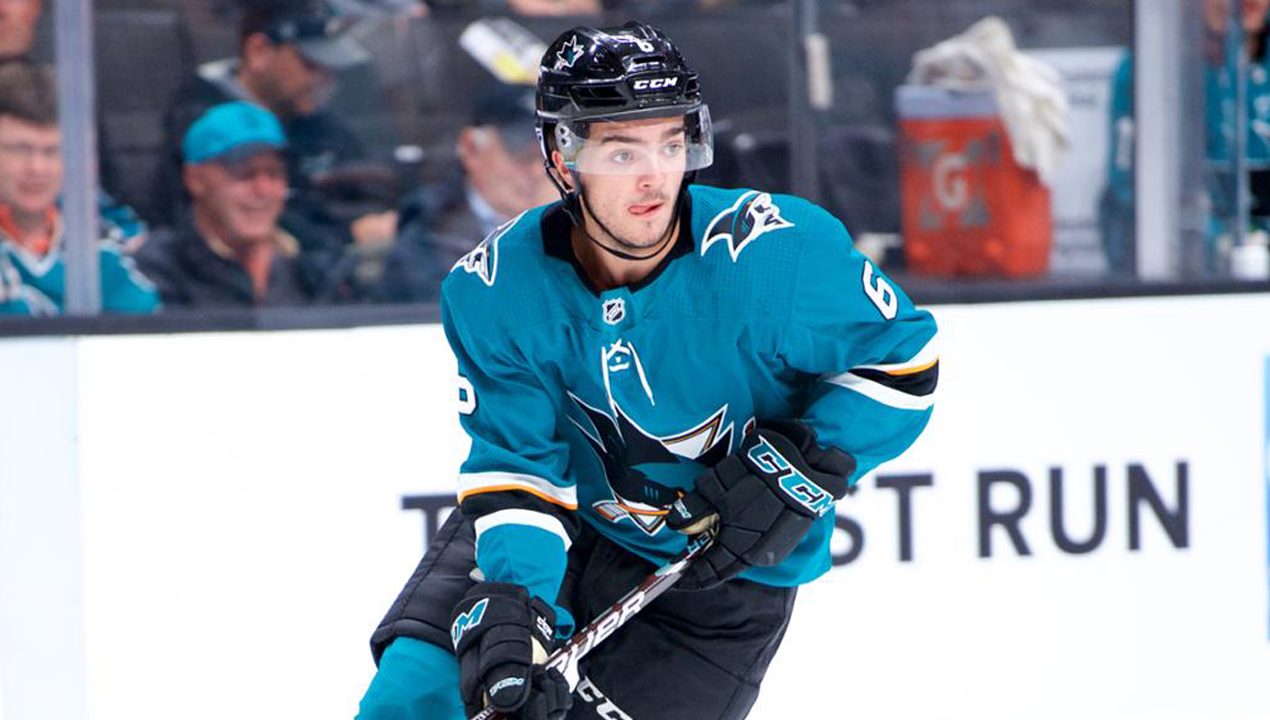 Part two the of the Sharks top prospects list features the franchises top 4 defensemen including one who is a high riser over the last 12 months.

If you missed part 1, read about prospects 11 through 15 as well as some honorable mentions.

To kick-off the top 10 we have former 2nd round pick, Tristen Robins. He is a skilled forward with above average skating ability and a powerful, accurate shot. Robins also carries the puck well and can beat players 1-on-1. His offensive production at the WHL level has not really improved as one would expect but I think his skills are more translatable to a bigger role than players like Brandon Coe or Ozzy Wiesblatt. Robins could develop into a complementary piece in the middle six with 2nd line upside, likely as a winger. His defensive game isn’t lacking which means he can make the team in a bottom 6 capacity without being a liability. Tristen’s combination of speed, vision and shooting could make him an offensive producer at the NHL level however, he will likely need a season or two with the Barracuda.

Mattias Havelid is an offensively gifted albeit undersized defenseman. Drafted in the 2nd round of the recent draft, Havelid is an elite skater with high top speeds but also strong edgework. He also has powerful shot that has a wind of finding the net. Mattias split his 2021-22 season between the Linkoping junior team (29-10-9-19) and senior team where he played 23 games in one of the top pro leagues. He also had an amazing showing at the U-18 WJC tournament for Sweden where he scored 4 goals and 12 points in only 6 games. Havelid looks to stick with the Linkoping senior club this coming season but has been dealing with an injury so has not suited up for any of the first 6 games. Mattias will also look to make the Sweden WJC squad later this year. His offensive abilities are high end, and his defensive game is not a liability, but there aren’t many defenseman his size that make it to the NHL. This will be something to watch but high end skills and lack of a true weakness could result in a top 4 role while also getting power play minutes.

Mattias Havelid, who has been splendid in this tournament, makes it 1-0 at 2:25 on the PP. #U18Worlds pic.twitter.com/hLuPE0LGjv

Gannon Laroque is the highest climber from last year’s prospect pool after a great D+1 season in the WHL. Scoring 10 goals and 52 points, Laroque lead the Royals defensemen in scoring by a significant margin. This was a huge leap from his draft eligible shortened season and could make his fall to the 4th round look silly. Laroque is responsible defensively and can play a physical game while also providing offense from the back-end. He has an NHL frame at 6’2 and 200 lbs, and while skating isn’t necessarily a strength, it shouldn’t hold him back at the pro level. Laroque was also able to squeeze in a few games at the AHL level following the conclusion of his WHL season, registering a single assist. This coming season Laroque should wrap up his juniors career as team captain for Victoria and with a chance to make Canada’s squad at the WJC tournament. Laroque will likely start his pro career with the Barracuda in 2023-24.

We're going down the stretch in Victoria thanks to this goal from Gannon Laroque!@victoriaroyals | @SanJoseSharks pic.twitter.com/8RBFdcenYg

Artemi Kniazev continues this run of defensemen here at number 7 and arguments could be made for him actually being the Sharks top defensive prospect at the moment. Kniazev has good offensive instincts and while not quite as skilled as our next prospect Merkley, he does a better job of finding the net with his shot which I think will be important for his development and progress to the NHL level. After a very slow start to his pro career, Kniazev adjusted to the pro game and registered 6 goals and 26 points in the final 36 games, leading Barracuda defensemen in scoring. Quite impressive for a 21 year old. Kniazev makes the right decisions with the puck on his stick, skating it out of the defensive zone, passing when is appropriate and getting the puck to the net to generate offense. His shot is strong enough to be effective at the NHL level. Kniazev does need to improve defensively. Typically plus/minus is not a stat worth following but it’s hard to ignore his -47 rating last season. Kniazev offensively has the tools to play at the NHL level but at the moment would be a liability defensively. With improvement though Kniazev could carve out a top 4 role with 2nd power play minutes.

Ryan Merkley jumps back to being the top defenseman in this year’s rankings. It was basically a coin flip between Merkley and Kniazev but ultimately comes down to upside and the elite skill that Merkley possesses. He showed last season that he can carry the puck and dangle players at the NHL level while also making what seem like impossible passes look routine. He has the upside of a top pairing and top power play defenseman. That is the good, now for the bad. Merkley still has a lot of question marks defensively and with his consistency. There truly is a very fine line between him being a star at the NHL level and not even playing. His skills are undeniable and can at times look like a “lite” version of Erik Karlsson, but he simply doesn’t generate the offense that he should with those abilities. Merkley often holds onto the puck longer than he should and gets himself into trouble. I also question whether his shot is NHL level as he struggles to find the net. Some of these issues can be solved by simplifying his game. Merkley hasn’t developed enough (and probably never will) to play like a Cale Makar. However he can still be effective offensively with some smart decisions and not trying to win the game by himself. If his decision making and game-to-game effort improves he could be a star for many years. If not, he will likely lose the trust of his coaches and need to look for a job elsewhere. Keep in mind Merkley just turned 22, so he has time to figure it out. He’ll likely be splitting time this coming season with the Barracuda and the Sharks.