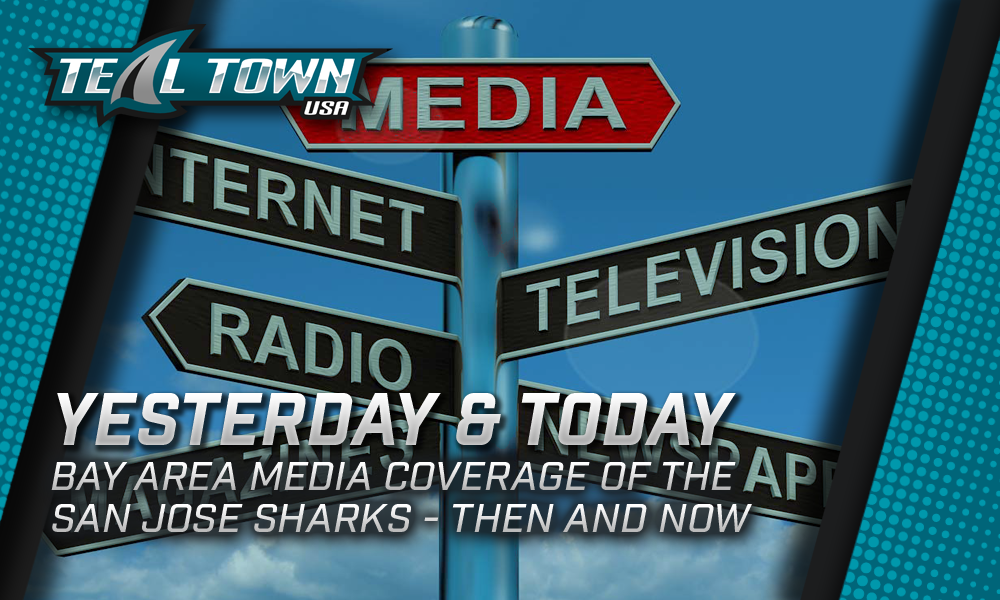 Since their inception, the San Jose Sharks have unfortunately been treated as an afterthought, a red-headed stepchild if you will, in Bay Area sports media. The bulk of regular coverage during the first 20 years of the franchise came by way of the San Jose Mercury News. I’m old enough to remember reading regular articles by Mark Purdy, Ann Killion, and Tim Kawakami about our beloved Los Tiburones. However, those days are long gone, especially after Purdy’s retirement.

In all honesty, the only one among that group that covered the Sharks with any regularity was Purdy. Killion, now with the San Francisco Chronicle, really only covered the Sharks during the playoffs, but even then her coverage was spotty, at best. During the 2000s, Kawakami occasionally wrote op-ed pieces about the Sharks, but those were far and few between. Tim’s most notable piece may be an article in which he declared the Marleau era had run its course for the Sharks back in 2012. Whether you agreed with Tim or not, Marleau’s next full season was one of his best, posting 70 points in 82 games and 7 points in 7 playoff games.

For readers of the San Francisco Chronicle, Ray Ratto and Ross McKeon were the usual Sharks scribes back then. Like Purdy, Ross was (and still is) a reliable byline counted on to regularly give you unbiased details and thoughtful information. Ratto pieces, on the other hand, could provide some jovial insight but his comments were often lost in the curmudgeon shtick he’s employed for decades. Some people just enjoy being miserable and Ratto works it to perfection, even when called out by Drew Remenda on live TV.

During the 90’s and into the 21st century, print media and local sports station KNBR was really the only way fans could find out what was happening with team teal. I’m kidding, of course, about KNBR. Like Killion, KNBR only talked about the Sharks during the playoffs and even then, they did it begrudgingly. However, that was then and this is now. As the internet age has evolved with new media, the writers have largely changed along with the platforms. Today, Sharks coverage is more in-depth, analytical, and fans actually get far more coverage during the regular season now, with the exception of local sports talk radio.

Full disclosure: many of the names listed below have appeared on a TealTownUSA podcast.

Now writing for The Athletic, Kurz initially began his Sharks coverage with Comcast SportsNet. Kevin was frequently featured as a guest on pre and post game shows as the Sharks “insider”. Since moving to the Athletic, I’ve found the articles by Kurz to be far more in-depth and cover a wider range of topics. Kevin also appears to be much more comfortable criticizing the team and front office decisions now.

While some Sharks fans find Kevin polarizing, I appreciate the honesty and candor of his articles. I’m not looking for every piece to be a Debbie Downer take, but I also don’t want pollyanna propaganda, ad nasuem. I’m all for optimism, but when the Sharks drop 5 straight with a pathetic effort, I want to see straightforward and blunt takes on fixing the issues rather than watching someone struggle to find a silver lining.

Curtis is the Sharks beat writer for the Mercury News. His forte is providing the reader with information from the morning skate along with postgame summaries. I’ve found Curtis provides unbiased reports focused on disseminating facts and letting the reader come to their own conclusions. Pashelka is also a solid follow on Twitter as he passes along a lot of ancillary information like arena renovations or changes with the Barracuda team.

Sheng has many bylines and I’ve found his talent is breaking down plays or analytics and presenting them to fans in an easily digestible way. Hardcore fans can talk for days about Corsi, Fenwick, and stats for days. However, Sheng is quite adept at educating the reader without making them want to break out an abacus. Sheng has a way, both in his articles and on Twitter, of dissecting plays that never talk down to the reader. During games, Sheng’s twitter feed can be very educational for fans wanting a deeper dive.

Everyone knows Brodie as the Sharks pre and postgame host. What some Sharks fans may not know is that he occasionally writes articles for NBCSNCA. However, Brodie primarily disseminates his takes on the Sharks, as well as other sports views and non-sports views, via his YouTube channel.

Beginning during the 2019 playoff run, Ted Ramey produces a weekly podcast on the Sharks called Morning Tide. A few years back, aside from a weekly hit between Tom Tolbert and Drew Remenda, Ramey was the only one flying the Sharks flag on local sports talk radio. Morning Tide gives you an encompassing glimpse of what happened that week in Sharks hockey as well as some solid talk with players and coaches.

Another writer with many bylines, I’ve found Ross to be similar to Curtis Pashelka. Ross isn’t going to invoke too much of his personal opinion in his articles. Like Pashelka, he tends to offer “just the facts” with a good amount of context allowing the reader to come to their own conclusions.

The regional sports network for the Sharks unfortunately provides little in the way of Sharks coverage on their TV station aside from pre and post game with Brodie Brazil and Curtis Brown.

In the past, NBCSN Bay Area has featured some Sharks-focused segments like Sharks Central. In these half-hour segments, Brodie has talked with Sharks players like Logan Couture at the batting cages or shopping for cars with Timo Meier. In previous seasons, fans could expect a new Sharks central episode every month. Recently, episodes of Sharks Central have been few and very far between. Yet, it’s still better than the days of SportsChannel and KICU36.

As for the written pieces on the NBCSN Bay Area web presence, I’ve found the site to be more of an aggregate of articles from other sites and social media posts rather than original content. In fact, Kurz has tweeted about this as you can see in the image. However, if you’re simply interested in quick bullet points of information rather than the in-depth and contextual articles, the NBCSN site is likely a good bookmark for you.

As you can see, there are a lot more people covering the Sharks now and most are worth reading as opposed to back then when Mark Purdy was the big fish in a very little pond.

While the writing landscape has largely changed over the last couple decades, there has really been only one change regarding local sports talk radio. We now have two stations that ignore the San Jose Sharks instead of only one.

Want an idea of how much 95.7 the Game knows or cares about the Sharks? Here’s a recent screenshot of the Sharks content on their website.

In fact, on the day this article was written, the 95.7 website has this graphic featured on their homepage.

Notice anything? I see a three San Francisco Giants, two San Francisco 49ers, an Oakland Athletic, a Golden State Warrior, and even a Las Vegas Oakland Raider. I get that sports radio needs content to kill air time and lazy constructs like Top 10 lists help fill the void. Even if you don’t mention the Sharks on-air, you’d think the graphic could include Joe Thornton, an obvious first-ballot hall of famer, or maybe Patrick Marleau, the career leader for nearly every forward-based statistic. Or maybe you include Marleau because he’s 45 games away from becoming the all time leader in NHL games played.

The 50,000 watt blowtorch is equally as comical with their website.

Again, nothing about injuries to Karlsson, Hertl, or Couture. Nothing about the COVID-19 impact on the Sharks or NHL. If it wasn’t for the unrest brought about by the murder of George Floyd, I’d doubt there would be a single Sharks article on the website from 2020.

The bottom line is if you want to read about team teal, there are many reliable options to choose from with the exception of the painfully outdated local sports talk websites. But if you want to hear live San Jose Sharks talk, your best bets are listening to the NHL Network on SiriusXM or listening to a feed of the flagship radio station of the opposing team on game day.

It’s insanely obvious that any solid and regular Sharks coverage San Jose fans can expect is either coming from the written word or podcasts. Whether it’s the offerings from TealTownUSA, Ted Ramey’s Morning Tide, or any of the other Sharks-related podcasts available on the interwebs, at least there is a lot more for fans to choose from today than there was just a few years ago. It’s also great seeing so many more writers covering San Jose’s NHL team. Try them all out and support the ones that appeal to your Sharks fandom.

What’s your favorite site to read about the Sharks? Leave it in the comments below.